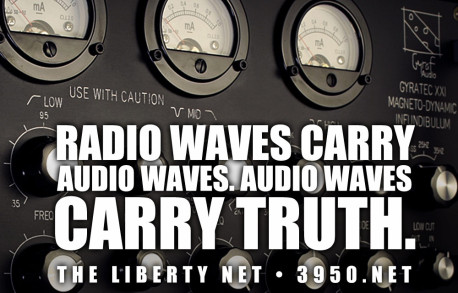 IF YOU can’t get enough of the Liberty Net, remember it’s on Wednesday nights at ten in addition to our regular Saturday Night session. So check in this Wednesday and say your piece! And don’t forget the Survival Net, too, where practical tips on personal, family, and community survival during hard times are shared freely on Sunday nights.

Here’s my choice from among the items discussed on this week’s net, along with my remarks:

• How low have we fallen when the endorsement of a treasonous serial rapist and criminal like Bill Clinton is considered an asset in a political campaign? (28 minutes)

• The random, stupid violence that ruins so many lives in this country — as at the Richmond Greyhound bus station this week — comes disproportionately from Mestizos and Blacks, who are far more criminally and violently inclined than other racial groups. Yet the Jewish-dominated media continue to promote the lie of “racial equality.” (48 minutes)

• It’s hard not to sympathize with people who want to build walls to keep out drug traffickers and shoot pushers on sight. However, a much deeper insight into the drug epidemic is this: Why do our young men and women so willingly take these drugs? Why are their lives so empty of purpose that all they want to do is escape? Why are they unable or unwilling to marry and have children? Why are they so depressed that they are taking legal drugs at record levels in a vain attempt to alleviate that depression? Why don’t they believe in themselves or their future? Why do they hate themselves? (55 minutes)

Remember that you can find — and check in to — the Liberty Net on or near 3995 kHz every Saturday night at 10PM Eastern Time, or you can listen live on the Internet by clicking on the “live” tab at the top of this page — or listen whenever you like on your player via the mp3 files posted here at https://3950.net every week. (And don’t forget the Survival Net on Sundays and the Midweek Liberty Net on Wednesdays, all at 10PM Eastern.)