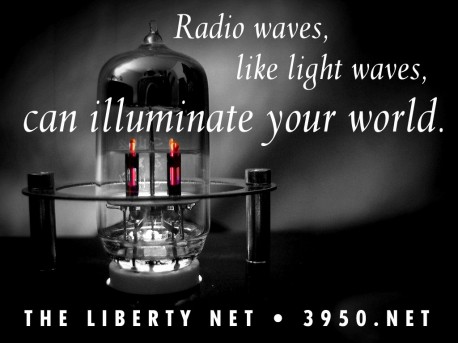 THE LIBERTY NET has many purposes: comradeship, bypassing the billionaires’ media and sharing information directly, personal inspiration, amateur-to-amateur help and advice, and much more. It may take a little courage to say the emperor has no clothes for the first time — but courage is contagious. So get a ham ticket if you don’t already have one, and check in to the next session of amateur radio’s longest-running discussion net.

Here are just a few of the topics discussed and debated this week:

• When Medicare refuses to pay and engages in endless delaying tactics — as more and more Americans are experiencing lately — is it appropriate for a citizen to employ a collection agency? (35 minutes)

• There’s a grassroots movement to get millions of Americans to buy an ounce or more of silver and take physical delivery. This, it is hoped, will make it difficult for J.P. Morgan Chase to cover their illegal naked short selling of the metal — and might even force them to stop the practice, which regulators refuse to investigate. (55 minutes)

• There is a principle of sound economics which tells us that “what can’t be paid, won’t be paid.” And unless there is a radical — extremely radical — gutting of all the Washington regime’s programs, we face financial Armageddon. Therefore we must end all our aggressive wars, cut down to a military perhaps one tenth the size of what we have now; put an end to all entitlement programs for the underclass; terminate all corporate welfare and bailouts; and permanently cease all foreign aid and foreign intervention. (1 hour 2 minutes)

• Auctions of treasury bonds are now announced very quietly because of the embarrassing dearth of buyers. Practically all the bonds are being purchased by the Federal Reserve, which itself may fail spectacularly — even though it is claimed to be failure-proof. (1 hour 7 minutes)

• There is something supremely bizarre in watching the increasingly degraded and increasingly impoverished American population going all ga-ga over the “royal wedding” of degenerate British aristocrats, utterly owned themselves by the same money-men who misrule the United States. Some are calling the nuptials a celebration of the union of the House of Windsor with the House of Rothschild. (1 hour 25 minutes)

• A new book is set to be published on the topic of Obama’s fraudulently-obtained social security number, which, oddly enough, was issued in Connecticut, where Obama never lived. (2 hours 40 minutes)

• Barack Obama Senior’s disgusting rape-a-thon of White college girls in the 1960s was a symptom of a deep societal decay in America, a decay that has reached its symbolic culmination in the elevation of the product of that sexual abuse to the White House.  (2 hours 44 minutes)

• The current regime that rules America from Washington and New York combines the very worst elements of capitalism and socialism — the heartless “I’ve got mine, Jack” insecurity of capitalism along with the “you must submit” bureaucratic dictatorship of socialism — the “national security” state of the Right along with the the total lack of freedom of association and financial privacy of the Left. (2 hours 55 minutes)

You can find — and check in to — the Liberty Net every Saturday night starting at 10PM Eastern Time (in recent weeks, DRM intereference has caused the net to meet somewhere between 3960 and 3993 kHz quite often). You can also listen live on the Internet via N2SAG (who also includes a lively chat room during Net hours) or N2IRJ , or listen at your leisure via the mp3 files posted here at https://3950.net every week.

Remember that the complete net recording is posted at the very top of the right column (under “Liberty Net Audio”) here on https://3950.net — usually on the Sunday immediately following the net, so look for it there if you’d like to listen. These articles and summaries (found in the center column) show up a few days to a week later.