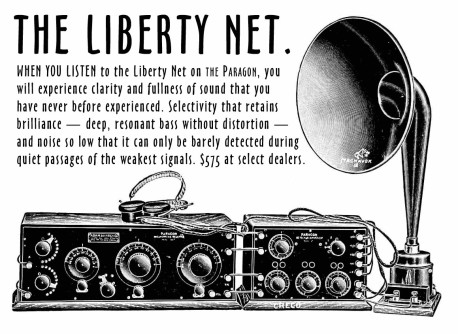 IT’S AMAZING how the Liberty Net can bring together people from different ideological backgrounds and help them see common ground against the exploiters of our people. Open dialogue without the influence of Political Correctness can work wonders!

Here’s a brief summary of — and my take on — some of the items and ideas discussed on the net this time:

• Fetchit promised us that the “Trans-Pacific Partnership” (which is one of those “laws” that apparently must be passed before it can be read) would not affect our food, our standards for consumer items, or our labor situation — which are all fantastic lies. The oligarchs want especially to employ cheap labor on an even more massive scale than at present. (30 minutes)

• The establishment of so-called “sanctuary cities” (wherein city administrations cooperate with billionaires and anti-White activists to protect illegal scab-labor invaders) is a direct blow against our people, economically and — what is much worse — genetically. (34 minutes)

• The fact is that, under The Tyranny, government agencies can do anything they want to citizens — at least citizens who don’t have a spare quarter million lying around for a legal defense fund. (38 minutes)

• Crazy Glenn Beck (who once declared he loved Jews so much that he was one, and has recently vowed to personally go to the border and help Middle Eastern “migrants” invade the United States) has forbidden hosts on his radio network from talking about Donald Trump. (43 minutes)

• When a woman in a Trump-organized focus group said “I used to sleep with my front door wide open, and now everyone around here has multiple deadbolts — I think the best days of this country are behind us,” and other White Americans made similar comments, it reportedly made Jewish political operative (and Fox News talking head) Frank Lutz’s “legs wobble.” (45 minutes)

• For once in their lives the smarmy establishment types at Salon.com many be correct — they say that “dog whistles about crime and welfare may no longer be enough” for White voters who formerly voted Republican: these voters want “party leaders who are committed to defending the country’s ‘White heritage.'” Except for putting White heritage in scare quotes as if it doesn’t exist, that’s about right. (47 minutes)

• Huge numbers of Germans, including many families with children, have rallied to protest the government’s plan to allow almost a million non-White “migrants” to legally enter the country this year alone. The traitor Angela Merkel called the protesters “vile.” (54 minutes)