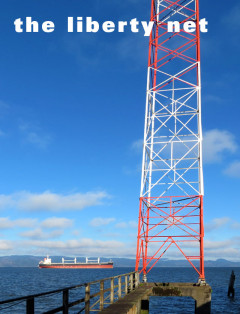 NOW THAT Spring is looming on the horizon, we need to be aware that thunderstorm-related static will soon be a major factor on the 75 meter band — making the signal-to-noise ratio much worse than in wintertime. So this is a good time to improve your antenna system and make it maximally effective, especially since the year’s most pleasant weather for working outdoors will soon be at hand.

Here’s a short selection of just a few of the topics from this week’s net along with my commentary:

• The SAT test in the US has now been dumbed down even further by eliminating the vocabulary section and the writing sample section. Why? Because it’s “too difficult for today’s high school students” (meaning Blacks and non-White Third World immigrants). So the SAT “numbers” will stay the same or perhaps even get “better” — while in reality the students are becoming less intelligent and less well-educated. Pretending, however, does not invent spacecraft or solve social problems. Such is the way that civilizations fall. (14 minutes)

• A Virginia school system recently required students to view a film on “racial discourse” which was an undisguised propaganda piece designed to induce guilt and low self-esteem in White students. A hopeful sign is that White parents were so outraged that the school district was forced to stop using the film. (16 minutes)

• Ted Cruz showed his real loyalties when he walked out on a Christian audience which questioned his extreme Zionist rhetoric. Cruz collapsed, refused to finish his speech, and whined as he left the stage “If you will not stand with Israel and the Jews I will not stand with you.” (39 minutes)

• Ignorant, superstitious Evangelicals are being played like a violin by the Cruz campaign. It is extremely unlikely that a graduate of Harvard Law School could actually believe the religious nonsense that Cruz spouts in order to get votes. (41 minutes)

• All the rhetoric about which of the candidates are “natural born citizens” is excessively technical and misses the point. The founders of this country and authors of the constitution made laws under which White people and only White people could be citizens of the United States, and that is the most significant meaning of the “natural born citizen” requirement. (49 minutes)