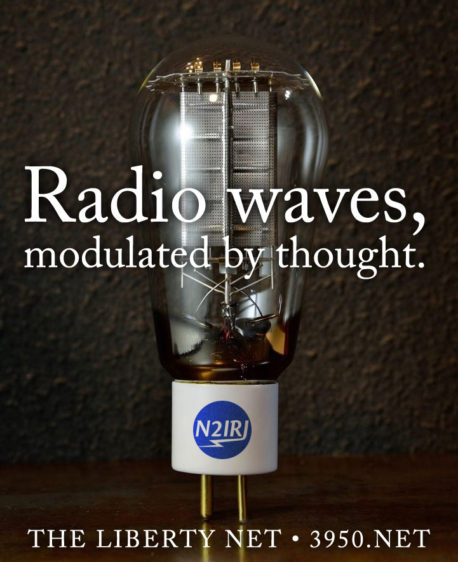 THE LIBERTY Net and Midweek Liberty Net and Survival Net are cooperative, community ventures run by volunteers. When one Net Control Station can’t be there, another steps in so the Net continues. On those very rare occasions when no NCS volunteer is available, an informal net usually takes place spontaneously anyway. In every case, valuable information is shared and community is built. Join us and enjoy the fun and sharing soon!

Here are a few of the topics brought up on this week’s Liberty Net, along with my comments:

• A good medium-distance 75 meter propagation beacon for those in the eastern part of North America is Navy station NAM, running 850-Hz shift encrypted RTTY centered on 4005 kHz. The station is one of the earliest utility stations, dating from the 1920s, and is located near Norfolk, Virginia. It’s on for most of the evening every day. (11 minutes)

• It’s good to see more and more realism about American history — such as substituting the term “War of Northern Aggression” for “Civil War” when discussing the 1861-1865 fratricidal conflict. (22 minutes)

• Having the FBI investigate Hillary Clinton’s security violations is like having Don Corleone investigate hit men and vice. (36 minutes)

• Many people question the late Muhammad Ali’s political and religious views. But on one subject he was 100 per cent. right: Ali was totally opposed to racial mixing. (39 minutes)

• We need to stop talking about ending “illegal immigration.” Honesty is needed — or the political class will cut away the ground under our feet by simply legalizing the invasion. Instead of opposing “illegal” immigration we need to forthrightly oppose — and end, and then reverse — all non-White immigration. (52 minutes)