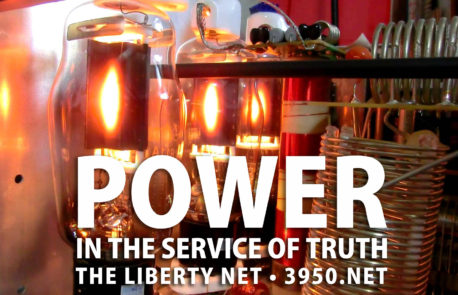 MANY READERS wonder just what kind of equipment they should use to start out in amateur radio and to participate in the Liberty Net. There are many different answers to that question, from vintage gear to the latest that technology has to offer. My personal preference is now — after experiencing several of them — to go with a Software Defined Radio (SDR).

The razor-sharp and infinitely-variable filters, ruler-flat frequency response, and clear, low-distortion capabilities of SDRs make them a whole order of magnitude better than conventional transceivers, in my opinion.

There are two major manufacturers of SDRs: Flex Radio and Anan. There are also numerous new start-up companies entering the field, like Italy’s Elad, so development and competition are in full swing. There are models that you can buy new for under $1,000, such as the Anan 10E, and I have seen used Flex SDR-1000s (an older model which I use) for under half that.

Here are a few of the subjects discussed on this week’s Liberty Net, along with my take on them:

• Chicago is quickly turning into another Detroit, like an African city in North America. There have been 500 confirmed homicides there so far this year, almost all perpetrated by Blacks. (59 minutes)

• It looks like Trump and Clinton are sharply divided on the issue of gun rights — but why is it that no candidate ever suggests that we fully restore the Second Amendment and invalidate each and every law that restricts private ownership of firearms in even the slightest way? (1 hour 5 minutes)

• Is it inevitable that Japan will develop nuclear weapons if the ever-weakening Washington regime leaves them to their own defense, sitting as they do so close to nuclear-armed North Korea and China? And, if the answer to that question is “yes,” then isn’t it also inevitable that Iran will develop such weapons as well, sitting as it does so close to nuclear-armed Pakistan, India, and Israel? (1 hour 15 minutes)

• Under the old evil patriarchy, one family member working was enough to support the whole family with money to spare, and there was plenty of time to spend with the kids. In the new, “caring,” “kinder,” feminist America, both parents must work, they’re barely making ends meet, and the children are sent to daycare providers or are raised by the television, often developing horrific psychological problems. You’ve been enslaved and you don’t even know it. (1 hour 26 minutes)

• Even as we speak, Jewish financial fraudster and uber-billionaire George Soros is planning violent riots in Cleveland during the Republican convention there this Summer. The riots, of course, will be billed by the Jewish-owned media as “spontaneous protests” and coming from “poor people and oppressed minorities.” (1 hour 45 minutes)