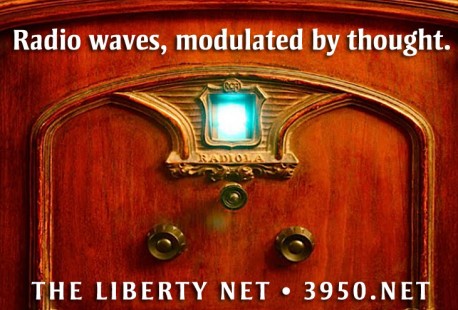 LAST WEEK there were two informal Liberty Net gatherings on 40 meters — so there’s a possibility that we’ll try a regular session on that band in the future. (Wow, that would make a total of four Liberty / Survival Net sessions per week!) At present, conditions on 40 don’t seem particularly stable, but afternoon and evening seem better than morning and midday so far.

Here are a few of the latest issues discussed on the Liberty Net:

• Don’t get dragged into thinking that the latest Fox News / MSNBC “scandal of the week” or “outrage of the day” is important. They are largely just red herrings designed to distract us from the fact that we are ruled by an illegal government controlled by our enemies, and delude us with the idea that one of the bankers’ political parties or the other is a real solution. (11 minutes)

• The Washington regime’s “Department of Justice” has decreed that its employees may no longer use the words “husband” or “wife” when referring to spouses — to do so is now categorized as “hate speech.” (20 minutes)

• Never do anything of substance to change things. If you do, you’ll be called a “racist,” a “hater,” and be accused of “conspiring” against the regime which pretends to be the legal, legitimate government of the United States. (40 minutes)

• Don’t be fooled by the neocons when they claim they want to eliminate the IRS and replace the income tax with a consumption tax. The only change we might get is a new tax on top of the ones we already have, and lots of new powers for the IRS goons. (42 minutes)

• Who decided that homosexuals had to be called “gay”? Who decided that “Miss” and “Mrs” had to be replaced by “Ms”? Who decided that US passports had to use the terms “parent one” and “parent two” instead of “mother” and “father”? One thing’s for sure — there was no public demand whatever for such changes. These were top-down decisions endorsed by the billionaire oligarchs. (47 minutes)

• More and more countries — about 60 per cent. of the world in fact, and now including Australia, New Zealand, and Switzerland — are no longer using rapidly-depreciating US dollars in their commercial transactions. (1 hour 8 minutes)

• Our society has now reached the point where women are the primary breadwinners in 40 per cent. of American households, and “conservative” Fox News commentator Megan Kelly thinks that’s just fine. She endorses interracial marriage too. Conservatism, RIP. (1 hour 14 minutes)

• They seldom articulate it out loud, but it’s easy to figure out the implicit moral code of the illegitimate elite that misrules America. You can do this just by looking at their actions on every issue from immigration to feminism to abortion to taxation to “affirmative action.” Their “moral code” amounts to this: Whatever brings more White babies into the world is evil; whatever prevents White babies from coming into the world is good. (1 hour 17 minutes)

Please check in with your call sign, and add your voice to the most exciting net on the amateur bands — every Saturday night, starting at 10PM Eastern Time, and Wednesday nights at 9. (And check out the Sunday 9PM Survival Net too.)  The frequency varies to avoid causing interference, but is almost always somewhere above 3950 kHz LSB, quite often on 3980 or 83.