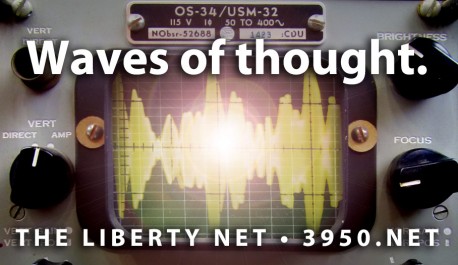 HAVE YOU EVER THOUGHT about going on strike? — withdrawing as far as possible from supporting the economy, the regime in Washington, and the parasites that feed on them? — withdrawing from any act, economic or otherwise, that supports the regime’s murderous, illegal wars? Think about it — and listen to the three weekly Liberty Net and Survival Net sessions for fresh ideas that could change your life and the world.

Here are a few of the latest ideas put up for discussion and debate on the Liberty Net:

• In Europe, the System’s police refuse to protect the people from immigrant violence and aggression. Even worse, the police attack the people when they protest the violence, human trafficking, and other crimes committed by non-Whites. But there is hope — nationalist groups are stepping in to do the job that the police will not do. (36 minutes)

• In Sweden in recent years, 99 per cent. of rapes were committed by non-Whites. In Norway it’s 100 per cent. People are beginning to question the billionaires’ mantra “our diversity is our strength.” (55 minutes)

• Don’t ever think that the oligarchs and their politician employees are “being stupid” or “making a mistake” when they import Third Worlders into our countries by the millions. It’s being done deliberately, and for several reasons: 1) to commit genocide against White people, who are passionately hated by the oligarchs, and 2) to create chaos in order to justify a police state. (1 hour 1 minute)

• The oligarchs have a plan for American conservatives. First, they will radically change conservatism: instead of being a noble effort to protect and preserve a unique people and their priceless genetic and cultural heritage, they will transform it into a phony “movement” totally focused on keeping one’s money and cheering on the regime’s murderous war machine. Second, they will liquidate the idiots they have tricked as soon as it is feasible. (1 hour 7 minutes)

• Despite the innumerable horrific crimes of the Washington regime over many decades, there is a resistance among otherwise decent people to state the obvious truth: The regime is outrageously illegal, and no one owes any allegiance to it. (1 hour 24 minutes)

• The regime in Washington is preparing to treat White Americans in exactly the same way it treated Amerindians 100 years ago — and as its ally in the Middle East treats Palestinians today. (1 hour 30 minutes)

• A whistle-blower at the World Bank has exposed the corrupt officials, centered around the US banking system and its so-called “Federal Reserve,” who manipulate the world’s peoples and steal their wealth through money creation. (1 hour 40 minutes)

Don’t be shy — check in to amateur radio’s historic Liberty Net every Saturday night — on some clear frequency near (usually above) 3950 kHz SSB starting at 10PM Eastern Time. The net has to be frequency-agile to avoid receiving, or causing, interference. And check out our Internet feeds which can help you copy, and communicate with, weak stations. The “live” links can be found in the left column of this site. And don’t forget the new midweek Liberty Net session on Wednesday evenings, and the Survival Net on Sundays, at 9PM Eastern.