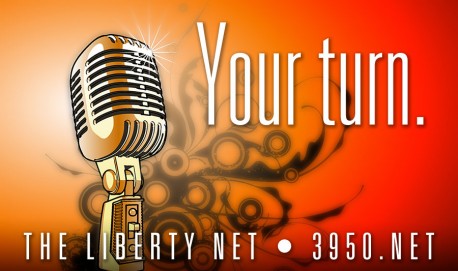 SINCE CLEAR frequencies, particularly in the very high end of 75 meters where the Liberty Net usually operates, are at a premium, it would be an excellent idea if net participants would start a pre-net QSO an hour or so ahead of time somewhere near 3995 kHz — as soon as it’s clear. Also useful would be abandoning the tendency to be “fashionably late” for the net: It’s always better to have a strong contingent of check-ins right away.

Here’s a selection taken from the topics discussed on the net this session:

• It’s a sign of the end of America when the alleged “first lady” refers to Nigerians, however bad their situation, as “our girls.” (15 minutes)

• The man who wants to have New Hampshire vanity plates reading “COPS LIE” has just won an appeal in court. (25 minutes)

• Nationalists and traditionalists should become willing to join hands with Occupy Wall Street types, and vice versa: Both groups oppose the oligarchs’ regime in Washington and the rule of this nation by the moneyed elite. The nationalists should wake up to the fact that Wall Street and big business are not now and never were their friends. And the OWS folks should wake up to two things: 1) Real social consciousness can only arise among a racially homogeneous people; and 2) The oligarchs are almost all members of the world’s richest ethnic group, a fact of overwhelming importance. (39 minutes)

• The regime’s “National Security Agency” (NSA) has taken to recruiting via Twitter by posting code-breaking quizzes there every Monday. One hopes that soon, all decent Americans will refuse to work for Washington even if offered a million dollars an hour. (43 minutes)

• Is it true, as some in “patriot” circles allege, that “skin pigmentation” is just a laughable distraction from the “real issues that face us”? No. Race is the essential factor in making nations; without biological, racial unity, you do not have a nation — you have an empire. The founding fathers recognized that fact: The laws they created specified that only those of European descent could become American citizens. And race is far, far, more than “skin color” — it embodies differences ranging from behavior, intelligence, innate proclivities and character, genetics, abilities, to appearance; and race is essentially synonymous with subspecies, as genetic distance analysis proves. (57 minutes)

• Many people are re-reading Charles Coughlin’s book, Money, these days due to a recent reprinting — and are discovering that the famous radio broadcaster was not the “hater” we are told he was, and that he predicted many of the depredations of the oligarchs some 75 years ago. (1 hour 19 minutes)

• Apple’s iPhone not only collects and stores GPS location data about you, but it also analyzes the data and makes (often valid) assumptions about where you work, where you live, where you visit regularly, where your friends live, and what you like to do in your spare time. All of this information is sent to Apple by default unless you specifically turn it off — three or so menus deep under “privacy and location information.” (1 hour 25 minutes)

• Yahoo has made a decision that the “do not track” setting in people’s browsers will no longer be respected. The best defense is not to use Yahoo at all, but you could try to set your preferences not to accept any cookies from Yahoo or its advertisers and to wipe all cookies every time you exit your browser. (1 hour 27 minutes)

Our thanks go to W1WCR for his hard work and courage in keeping this very important part of the amateur radio service alive for 40 years!