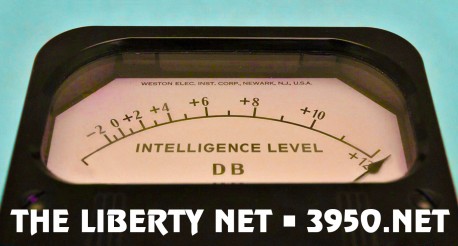 IN IRAN, in Syria, and in Ukraine, the Zionist/banker warmongers are constantly propagandizing us to go to war, almost always for specious reasons. Currently, Russia is being falsely painted as an enemy. False flag events are staged to convince us to catch “war fever.” One of the greatest things about the Liberty Net is the fact that many participants are connected to alternative news and information sources which are outside of the Washington regime’s propagandasphere. There is also a diversity of opinion on the net, allowing the listener or participant to make up his own mind after enjoying the interplay of ideas.

Here is my abbreviated selection of the concepts and issues debated and discussed this time:

• In Lynn, Massachusetts, the public schools are required to accept as “students” Third World illegal immigrants whose ages are not allowed to be verified. This not only results in racial mixing, but the subjection of middle school White girls to the advances of, say, Guatemalan or Somali fully adult males. (12 minutes)

• The vicious beating, by a gang of Blacks shouting racial epithets, of a White former marine (who was a stranger to them) in a restaurant parking lot in West Point, Mississippi has gone almost totally unreported in the controlled media. The local police chief says, incredibly, that this was not a hate crime. (13 minutes)

• Cops Always Tell the Truth Department: In Louisiana, a 22-year-old Black man was handcuffed in the back of a police cruiser with his hands behind his back, yet, according to the police report, was somehow able to commit suicide by shooting himself in the chest. (15 minutes)

• It is an outrage that individuals or businesses are required by “law” to associate with people with whom they would never freely choose to associate. Time to repeal all the forced association laws, whether they refer to race or sexual proclivities or anything else. (20 minutes)

• It’s a sign of the times (and our decline into a Third World tyranny): Americans are renouncing their citizenship at higher rates than ever before. (25 minutes)

• In Brazoria County, Texas, a jury has completely acquitted a man who openly shot to death the drunk driver who had just run over and killed his two sons. (40 minutes)

• Almost all politicians, and candidates from either controlled party, are hand-picked by the financial “powers that be,” so the deluded voters never have a choice. The one sure way to detect an authentic political figure is to notice how intensely the controlled media attack him as “evil.” (54 minutes)

• There are currently 41 members of Congress who hold dual US-Israeli citizenship, and the Israeli lobby has a hammerlock on both Democrats and Republicans. So it’s not remarkable that the US is often the lone holdout when nations by the hundreds condemn Israel’s atrocities. (59 minutes)