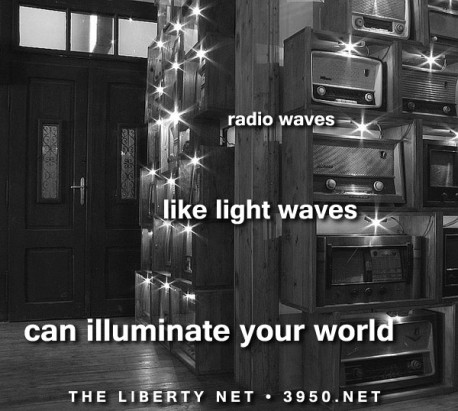 KEEPING RECORDS — audio recordings, logs of signal strengths and transmitter characteristics, et cetera — has proven to be a valuable strategy in deterring jammers from interfering with the Liberty Net in recent years. Few such miscreants want to be identified as the perpetrators of such shameful acts, evidently, and the number of these incidents is way, way down in the half decade since we began this site.

Here’s my brief synopsis and analysis of just a few of the events and concepts brought forward on this week’s net:

• Why can’t the Semitic countries of the Middle East take in the flood of Semitic, Middle Eastern “refugees” — instead of White European countries? Semites aren’t compatible with European societies — not culturally, not religiously, and especially not genetically. They need to stay with their own people. At the same time, it must be said, we need to stop invading and bombing Middle Eastern nations and stop murdering their citizens on behalf of Israel — all of which create the chaos which millions are desperate to escape. (39 minutes)

• The treasonous regime in Washington — “encouraged” by the Jewish lobby, of course — is eager to further harm White Americans by importing tens of thousands of Syrian “refugees” into this country. (44 minutes)

• There is some debate on whether we should redefine Islam to be an enemy ideology instead of a religion, so that the Constitution’s freedom of religion protections will no longer shield it from being outlawed. If that’s true of Islam, though, then it’s at least doubly true of Judaism, a far more dangerous thing for our societies. (54 minutes)

• Probably the Semite invasion could be stemmed by a much simpler technique, however, and one that is perfectly in the spirit of the American founding fathers: Simply restore America’s original race-based definition of citizenship. If no non-Whites can immigrate or be citizens, then the problem is instantly solved. (59 minutes)

• There are huge differences between Black-occupied Detroit and the nearly all-White towns (which add up to a similar population) just a few miles away: The murder rate is 6,100 per cent. higher; arson is 2,991 per cent. higher — burglary and other crimes follow a similar pattern. Detroit is also utterly bankrupt. The Jewish-controlled news media will shout you down if you tell the truth about these things — if you openly state that we do not have a “gun problem” or an economic problem here: we have a race problem. (1 hour 9 minutes)

• A group of Jews in the Netherlands has come out in favor of more mass immigration of Muslim “refugees” into tiny Holland — but has demanded that they not be settled in “Jewish neighborhoods.” (1 hour 18 minutes)

• The treasonous governor of Minnesota went into a rage on stage a few days ago, telling Minnesotans that they should “leave Minnesota” if they are so “racist” as to be against bringing in millions more non-White invaders into the — until recently — nearly all-White state. (1 hour 20 minutes)