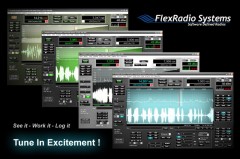 The discussions included insights and opinions — and quite a bit of debate and disagreement — from AB2EZ, WB2CAU, N3WWL, N2DTS, and others.

Ever since I was the chief engineer at WEAM in Arlington, Virginia, this has been a topic of great interest to me. The 1970s and 1980s incarnation of WEAM used a 10-kilowatt RCA BTA10U2 plate-modulated transmitter with reduced B+ voltage on the final amplifier running just 5 kW output. It was capable of cleanly modulating more than 170% in the positive direction. Extensive experimentation has led me to agree with Mike Dorrough (KO6NM) on asymmetric diode-detected AM, particularly when skywave is a factor:  It is better to reduce voice asymmetry with all-pass filters and stay close to balanced positive and negative peaks in audio processing. This eliminates the inherent distortion caused by forcing positive peaks to be higher, and also causes the character of any limiter-induced distortion to be more “musical” and pleasing to the ear. It also minimizes selective fading distortion and distortion caused by detector nonlinearities at modulation extremes. And any dB or two “loudness deficit” compared to aggressively induced or natural asymmetry can easily be made up in the adjustment of the final limiter. (By the way, Inovonics is now producing broadcast audio limiters designed to force symmetry in the final audio waveform, in total contrast to the forced asymmetry that has been the prevailing paradigm up ’til now. )

You can listen to a big excerpt from the Flex Radio Users Net here, as recorded by me from an online Icom PCR-1500: