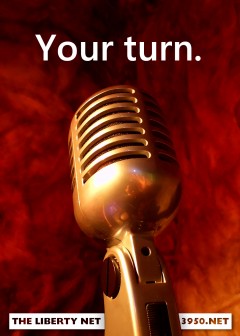 BEHIND THE SCENES, a sting operation was successful in outing one of the 75 meter jammers who have plagued the Liberty Net in the past, and we hope that fear of future consequences will keep him and his fellow miscreants off the air permanently. There were quite a few new callsigns heard on the Liberty Net this week, and the frequency was almost interference free.

Here’s a selection of the issues discussed this time on amateur radio’s longest-running discussion net:

• What have our armed services become today? They are flooded with huge numbers of Blacks looking for an alternative to crime and welfare (they even use violent “rap” music to work up these new-type soldiers to a frenzy before sending them off on killing assignments in the Mideast); they are now recruiting Muslims and other Third World immigrants on a massive scale; and soon they will be openly welcoming homosexuals. The US armed services have become the mercenaries of an evil multicultural empire, and conservatives should stop regarding them with their accustomed, and wildly inappropriate, reverence. (9 minutes)

• An Austrian man was arrested and fined 800 euros for yodeling in his own yard. A Muslim immigrant neighbor claimed to be offended by the yodeling because he thought it was a mockery of the Muslim “call to prayer.” (22 minutes)

• The recent conservative Republican support for “Don’t Ask Don’t Tell” is a perfect example of the worthlessness of conservatism: A few years ago they attacked and opposed that policy; now they support it. Perpetually fighting a rearguard action and utterly without principles, they can never win and they have no vision of the future. (25 minutes)

• In Detroit, a public official with a sub-Saharan mentality and an entrepreneurial spirit started sending out “fine notices” to local businesses for utterly fictional “violations” of city ordinances — and then set up a “fine collection center” in his own home and pocketed the proceeds. It’s good to know that everything is running normally in Zimbabwe North. (54 minutes)

• Is the Fed using pallets of worn out Federal Reserve notes — which are supposed to be destroyed — to make illegal, untraceable payoffs? If not, why was one whistleblower threatened by the government for merely saying so? (2 hours 38 minutes)

• The world’s first gold-dispensing vending machine has been installed in Boca Raton, Florida. How long will it be before MS-13 figures out a way to haul it off with a grappling hook? (2 hours 43 minutes)

• Even the US military and the National Rifle Association are utilizing Asian slave labor. The military is now buying ship hulls and military uniforms from Communist China, and the recent NRA membership premium — a pocket knife — is also made there. (3 hours 5 minutes)

Check out amateur radio’s historic Liberty Net, established in 1974, every Saturday night — on some clear frequency near 3950 kHz SSB starting at 10PM Eastern Time. Recently the net has been meeting above 3960 to avoid the BBC’s deplorable digital transmissions (which sound like broadband white noise) on 3955.