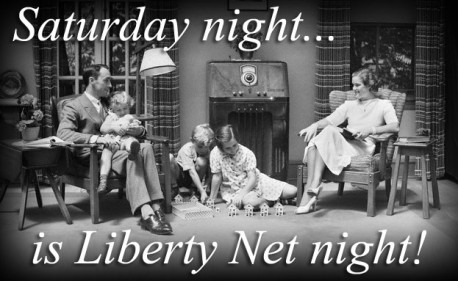 ROLLING THUNDERSTORM static that never seemed to stop inhibited early check-ins on this week’s Liberty Net, but the noise eventually subsided — and the conversation and exchange of information accelerated — as the evening progressed. When high noise conditions prevail, the extra few dB from an amplifier and a high, efficient antenna really make a difference.

Here are just a few of the topics discussed and debated this time on amateur radio’s most exciting net:

• Obama has brazenly ignored the War Powers Act — the very law he invoked to legitimize his invasion of Libya. And now that the 60-day deadline for getting Congressional approval has passed, that invasion is illegal by any standards. (13 minutes)

• Dominique Strauss-Kahn’s rape and sodomy charges may be the least of his worries: Apparently the Black African woman he allegedly raped lives in an apartment set aside exclusively for tenants who are infected with HIV. (21 minutes)

• Mirroring what happened to Helen Thomas, more and more individual journalists are being forbidden to ask questions at administration press conferences, and some regime officials no longer allow questions from anyone. (51 minutes)

• All over the world, cash-strapped governments have started to tax (that is, seize) private pension funds that were long promised to be tax free, in order to fund entitlement programs for the underclass and bailouts for the overclass. This means that all your funds could be gone by the time you retire. (1 hour 55 minutes)

• Congress has already passed pretended laws — which go into effect in 2012 — requiring that all your transactions involving $600 or more be reported to the regime in Washington. Whatever happened to the concept of financial privacy? (2 hours 3 minutes)

• China is now the number one buyer of gold in the world — getting rid of its paper dollars faster than ever before; a fact which should send a powerful message to Americans. (2 hours 36 minutes)

• The regime, by shamelessly raiding Social Security funds to buy missiles and buy votes from the largely-worthless underclass, is flagrantly violating its own laws. America has degenerated to the point at which laws are now only enforced selectively — that is, to benefit the regime in some way, or to silence its critics. (3 hours 6 minutes)

In addition to checking in and experiencing the Liberty Net over the air, you can log on Saturday evenings beginning at 10PM Eastern for live audio feeds of the Net (sometimes from several stations simultaneously) and live text chat too at http://stickam.com/thelibertynet via N2SAG.

All our thanks go to N2SAG and N2IRJ and especially W1WCR for their hard work which makes the Liberty Net and its Internet adjuncts possible. Remember, you can download the mp3 recordings of the net right here at https://3950.net and listen in your gym, or on your way to work, or anywhere you choose.