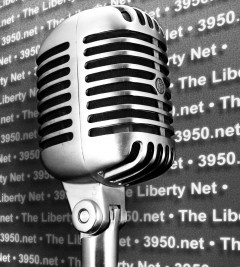 • The American formula for prosperity: Borrow counterfeit money, spend it as fast as you can, then borrow more; repeat infinitely. Why isn’t it working? (1 hour 26 minutes)

• Very few Americans know how utterly cynical and immoral the regime in Washington is. Of those few, only a fraction care. (1 hour 35 minutes)

• The criminals in Washington are deliberately targeting White communities, including many in Maine and New Hampshire, for the settlement of Somali invaders. (1 hour 44 minutes)

• It’s no secret. Israel now openly brags that they have the US Congress “in their pocket.” (2 hours 11 minutes)

• The ethnically distinct billionaires who own the media — whether they pretend to be “leftist” or “rightist” — all hate Ron Paul. He’s neither a neo-Marxist equalitarian nor a neocon Zionist warmonger, so he doesn’t fit in with the money-men’s agenda. (2 hours 59 minutes)

You can find — and check in to — the Liberty Net every Saturday night starting at 10PM Eastern Time (in recent weeks, the frequency has been well above 3950 SSB — and has often been on 3980). You can also listen live on the Internet via N2SAG (who also includes a lively chat room during Net hours) or N2IRJ , or listen at your leisure via the mp3 files posted here at https://3950.net every week. For the next week or two, N2SAG’s feed will be off line, so please switch to the N2IRJ live feed on those nights.

Remember that the complete net recording is posted at the very top of the right column (under “Liberty Net Audio”) here on https://3950.net — usually on the Sunday immediately following the net, so look for it there if you’d like to listen. These articles and summaries (found in the center column) show up a few days to a week later.