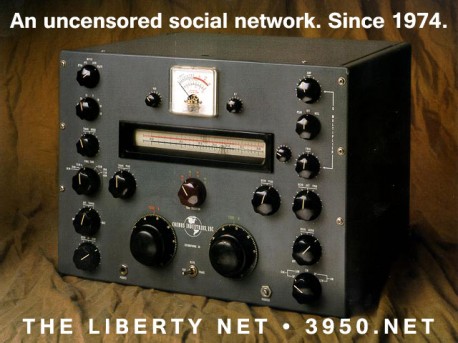 BEING ALIVE in these times is an extraordinary gift; the ability to learn from and communicate with creative, intelligent, and insightful people is almost unlimited. One of the pioneers in electronic social networking is amateur radio’s Liberty Net, sharing ideas and uncensored information over the airwaves since 1974.

Here’s a selection from the issues brought up this time on the Liberty Net:

• The fact that you can now be charged with a crime for “failure to buy insurance” is a sure sign that the US Constitution is dead, dead, dead. (2 minutes)

• Since the start of the “war on poverty” a half century ago, 15 trillion dollars have been wasted and the percentage of the poverty-stricken has not changed one iota — and their absolute numbers have increased. What should we learn from this? 1) Some people are genetically less well-endowed than others, and no amount of help or education can change this; and 2) the regime in Washington cannot be trusted in any way. Their agenda was never to help anyone, anyway — it was to enslave and impoverish us. (20 minutes)

• A tipping point has now been reached where the people who work for a living are outnumbered by those who vote for a living. (24 minutes)

• In addition to exterminating us, one of the major reasons the oligarchs are bringing peon labor by the millions into every White country is to drive down wages to a subsistence level. (30 minutes)

• Feminism is absolute poison for our people, men and women alike. Why would White women, with the highest and noblest calling in the history of the universe — the raising and acculturation of the next generation of our people — want to fight in squalid bankers’ wars in the military, or sell useless junk to clueless chumps in the “business” world? (48 minutes)

• In these bad economic times with jobs so scarce, almost no one wants more non-White immigration — even many non-Whites don’t want it! Yet more and more immigration is what we get. And almost no one wants to “bail out” billionaire bankers. Yet free money for bankers is exactly what we get. Doesn’t this suggest that we are not in any sense a democracy or a republic, but are actually ruled by a secret oligarchy? (1 hour 24 minutes)

• The Washington regime is now specifically targeting rural Whites — a group among which a large percentage are able to live off the land and pride themselves on that ability — for recruitment as food stamp recipients. Is the regime suddenly feeling generous? Or do they want to foster dependence and eliminate self-reliance? (1 hour 34 minutes)

• The illegal regime is now in the process of hiring an army of 150 to 200 thousand “facilitators” to “explain” (and enforce) the new and (they hope) inescapable health care monopoly. (1 hour 38 minutes)

The Liberty Net — amateur radio’s longest-running current events discussion net — is on the air every Saturday night at 10PM Eastern Time on or around 3950 kHz SSB (usually higher in frequency to avoid interference). You might have to tune around, but we’re not hard to find.