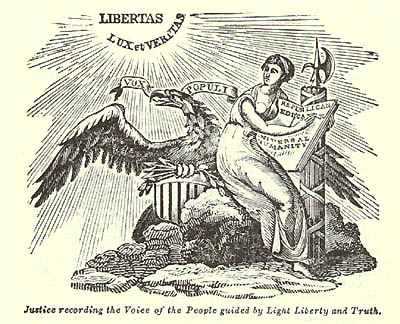 An early American allegorical engraving, showing Justice personified as a goddess recording the voice of the people guided by light, liberty, and truth. It is a particularly apt symbol for the Liberty Net.

JUST BEFORE this week’s Liberty Net, a very unusual wind storm in New Jersey — characterized by brief but extremely powerful “micro-gusts” of wind — caused extensive damage and protracted power loss; but N2IRJ’s generator saved the day, and the Net was able to be recorded as usual.

Here are a few of the highlights:

• The post-storm power situation in Jackson, New Jersey was so bad that the police resorted to robo-calls to, apparently, all citizens, to let them know about the situation. (6 minutes)

• The American Family Association (AFA) has made the bizarre demand that the orca that killed a trainer at Sea World should be “stoned to death” in accordance with “scripture.” (27 minutes)

• An activist going by the name of “Splitting the Sky” attempted to make a citizen’s arrest of George W. Bush for war crimes when the latter crossed into Canada. (29 minutes)

• Why is our economic relationship with Japan being sabotaged by the controlled media? Will the hysteria drive us further into the arms of China? (45 minutes)

• The owners of bad real estate mortgages are now starting to offer struggling homeowners cash buyouts to get them to vacate before legal foreclosure. (55 minutes)

• Robert Rubin — who set up the American economy for failure while in government service and then got a $100 million job with Citigroup to take advantage of the situation — continues to economically pontificate (for pay, of course) in the controlled media. (1 hour 15 minutes)

• Is there enough concrete in the country to build penitentiaries for all of Wall Street’s financial criminals, should they ever be brought to justice? (1 hour 18 minutes)

• Is it to the Republicans’ advantage to allow the monstrous “health care” bill to pass, so they can run against it next election? (1 hour 30 minutes)

• Should the military be brought back from the pointless and tragic wars in the Middle East and be used to deport illegal aliens from California and other states? (1 hour 49 minutes)

• Since more and more Americans are joining the underground economy where they don’t pay taxes, governments are increasingly pushing for higher taxes on the only visible target left: property owners — who may become victims to the extent that millions lose their homes. (1 hour 52 minutes)

• Is our increasing global “interdependence” seriously stifling creativity — and does it make us more vulnerable to natural disasters? (2 hours 2 minutes)

• We hear a detailed discussion of the government’s efforts to force Vic, W1WCR (Net Control Station for the Liberty Net) to answer intrusive and unconstitutional questions from the Census department. (2 hours 40 minutes)

This week’s Net was helped by good propagation, though an inebriated jammer did try to take over the frequency after the Net had officially closed, causing intentional interference to some Liberty Net participants who were still having a conversation. The jammer, who thought he was anonymous, slunk away when a local amateur identified him by call sign and name.

Check-ins begin at the start of the recording. You can listen to the Liberty Net every Saturday night on or around 3950 kHz (usually within 10 kHz) at 10PM Eastern Time.

My personal thanks go out to all of those who make the Net what it is, especially W1WCR, N2SAG, and N2IRJ.