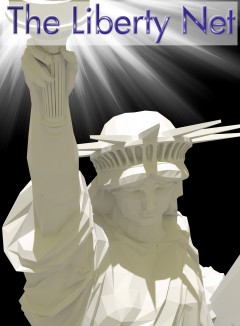 THE LIBERTY NET for this week was characterized by mostly good propagation and some of the most impassioned discussions heard this year.

There was some intentional interference, but nothing that significantly hampered communications. The Liberty Net is on the air every Saturday night at 10PM Eastern Time on or near (within 10 kHz or so) 3950 kHz.

Here is just a small sampling of highlights from this week’s edition of the longest-running discussion net in amateur radio:

• There’s a reference to the Liberty Net’s “listeners in Ft. Meade, Maryland,” (location of the so-called National Security Agency) as one station opines that Net participants are the modern-day equivalents of the signers of the Declaration of Independence. (14 minutes)

• Many AM stations — both amateur and broadcast — have quite good audio fidelity. (18 minutes)

• Why is Texas threatening to write Thomas Jefferson out of its history textbooks? (25 minutes)

• The White wife of Black Supreme Court Justice Clarence Thomas is attempting to become a player in the Tea Party movement. (1 hour 7 minutes)

• Is Obama pushing a health plan he knows will not work, in hopes that it will break the current system and leave us helpless — so we can be “saved” by a Cuba-style “reform”? He may be surprised, though — many thousands of Americans are so angry at the bill that they will finally sever all ties, emotional, financial, and legal, to the regime in Washington. (1 hour 21 minutes)

• The actual head of the federal government, Rahm Emanuel, is not an American. He is a foreign national, who actually fought for a foreign power, with no loyalty whatever to the American people. (1 hour 28 minutes)

• It seems that only White people are capable of being guilt-tripped into sacrificing their own future: China and India are not falling for the con games of the same parasites who have raped America and Europe nearly to death. (1 hour 31 minutes)

• An innovative new Web site is http://fiverr.com/ which features people offering a universe of services they’re willing to perform for just $5. (1 hour 48 minutes)

• A Pakistani immigrant in New Jersey was caught engaging in his specialty, urinating on women in public. He was in jail earlier, for attempted murder and assault, but he was released in a year. Why do we allow other nations to unload their criminals on America? The “diversity” religion leads to insanity. (2 hours 37 minutes)

• In Miami, a “traditional African church” (read: a Voodoo cult) has been started, which has been promoting the drinking of the mucus of the giant African snail to “heal” various afflictions. The practice has landed several Blacks in the charity ward of the hospital. (2 hours 45 minutes)

• A public meeting in Kentucky erupted in wild cheers when a Liberty Net participant asked a candidate — Rand Paul — if he was in favor of abolishing the Federal Reserve. (3 hours 45 minutes)

• The political and personal record of John McCain — a man who claims to be “different” but who is in fact an eager accomplice of the regime in Washington — is particularly loathsome. (3 hours 58 minutes)

There was some intentional interference to the Net this week, but perhaps that’s a badge of honor: if those who hate free speech hate the Net, then Net participants must be striking a nerve among the enemies of freedom. Check-ins begin at about the five minute mark.

Remember, thanks to N2SAG and N2IRJ and W1WCR, you can listen live — and chat live — via the Web whenever the Liberty Net is on the air. And, as always, you can download the Net right here at https://3950.net and listen at your leisure.