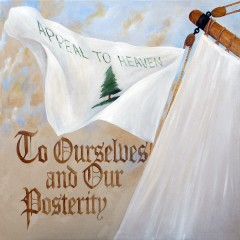 The authors of the Constitution fought "To secure the blessings of Liberty to ourselves and our posterity" -- in other words to our own descendants, our own people, our own race.

THE EASTER WEEK Liberty Net was a session full of cheer, friendship, sharing (of both good spirits and information), and camaraderie in the face of some intentional interference. This venerable net is on the air every Saturday night at 10PM Eastern Time on (or near, within about 10 kHz) 3950 kHz SSB.

Here is just a tiny selection of highlights from this week’s Liberty Net, brought to you by Net Control Station (NCS) W1WCR. The times indicated are from the beginning of the recording:

• When you have a country with bad demographics, you will inevitably have bad politicians. This is always the downfall of democracy. (13 minutes)

• Should an IQ test be mandated for anyone who wants to run for Congress? (14 minutes)

• Why did Barack Obama pick the “Black, African-American, or Negro” box on his census form, since he is evidently at least half Caucasian? (20 minutes)

• Is Koch Industries funding “climate denial”? Their founder was an early supporter of the John Birch Society — but doesn’t that indicate sincere patriotism, rather than any kind of conspiracy? (34 minutes)

• How did Colin Powell — and how do other members of the Washington elite — get paid for a few years in the low six figures, and yet end up worth some 40 million dollars? (1 hour 5 minutes)

• Why are some Americans so Neanderthal that they are not joyful about converting America into a Third World country, with a Third World president who rules like a Third World President? (1 hour 20 minutes)

• Are the lawsuits by a few state attorneys general opposing some aspects of Obamacare just a way to lull Americans to sleep in the false belief that their interests are being represented? (1 hour 25 minutes)

• Why was the recent murder of an American rancher by illegal Mestizo immigrants not covered at all in the major media? How would they have reacted if the roles had been reversed? (1 hour 45 minutes)

• Is the letter from an alleged patriot group threatening to remove state governors from office actually a “black op” run by the federal government, as was Hal Turner and his incendiary radio show? (2 hours 30 minutes)

• The very worst kind of “racist” is the kind that wants to wipe out entire races — and most of the media moguls and the Washington establishment fit that description. (3 hours 9 minutes)

Check-ins begin at the start of this weeks’ recording. Thanks to the dedication and hard work of N2SAG and N2IRJ and W1WCR each week, you can listen and chat live via the Internet whenever the Liberty Net is on the air. And you can download the Net mp3 files right here at https://3950.net and listen at the office or in your car — anywhere and any time you like.