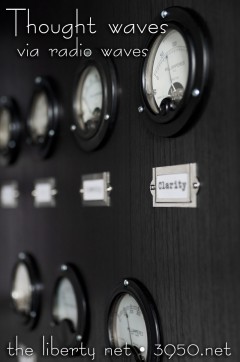 NOVEMBER 2012 was the biggest month ever for downloads and streaming of the Liberty Net from this site. Listeners from every continent except Antarctica logged over 50,000 hours of listening time! As our usage ramps up, so do costs. Please consider donating by clicking the ‘Donate’ button in the right column of this page.

Here are just a few of the topics covered during this week’s net:

• There’s no rational reason why amateur radio operators should have to tolerate broadcast interference between 3.9 and 4 MHz and between 7.2 and 7.3 MHz. Huge swathes of HF spectrum — even some already allocated to broadcasters — is virtually empty and unused, and the broadcasters should go there. (7 minutes)

• When you have an illegal, evil government — one which does practically nothing except harmful, immoral things — gridlock is a good thing. (11 minutes)

• Why should American taxpayers, huge numbers of whom have no pension at all, have to bail out the B’nai B’rith pension plan? (12 minutes)

• The particular ethnic group that has made endless billions through fraud and fractional reserve banking is now moving away from the urban areas their multiracial policies have helped to destroy, and is buying properties in still-American enclaves like rural Wisconsin and New England. As they do so, their money buys the local governments and brings corruption, degeneration, and ruin. (49 minutes)

• The dull often claim that votes for third parties and independent candidates are “wasted votes.” But the only truly wasted votes are those for either of the two major parties. (1 hour 35 minutes)

• The illegitimate regime in Washington is building huge data storage facilities around the country. The purpose? According to a whistleblower at the NSA, to illegally store the illegally obtained electronic communications of every American citizen, all of which are now being intercepted. (1 hour 56 minutes)

• Since the dumbing down of the electorate, and the importation of alien peon labor, make the ballot box a dead end for us, the only way to regain our freedom lies in massive civil disobedience. (2 hours 3 minutes)

• The big hug and kiss that Romney gave Obama after the election symbolize perfectly the illegitimate and illegal System that must be removed from power. (2 hours 5 minutes)