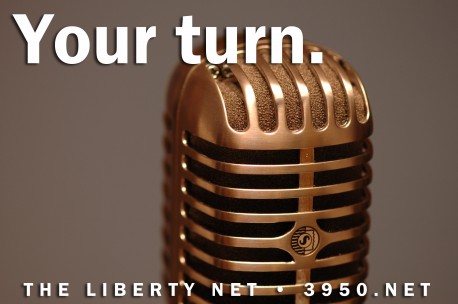 THE NEW Midweek Liberty Net, after only two sessions — Wednesdays at 9PM Eastern — is attracting enough participants to almost equal our Saturday session in terms of length — over four hours of conversations last time!

Here are some of the ideas brought up for debate on the Liberty Net this week:

• If the intelligence agencies can bring a city to its knees — and get almost any new nationwide “security” laws they want — just by deploying a couple of patsies with backpacks, just imagine what they could do with a bigger operation. (13 minutes)

• The recent media-fueled rehabilitation of the reputation of mass murderer and traitor George W. Bush is reprehensible and disgusting. (34 minutes)

• Don’t be fooled into believing that Fox News is some kind of “conservative alternative.” Fox is in the forefront of subverting conservatism and turning it into a war-mongering internationalist “national security state” creed — and that’s not surprising, considering that Fox is owned by uber-Zionist oligarch Rupert Murdoch. (43 minutes)

• The CSA has risen again — but this time “CSA” stands for the Corrupt States of America: An employee whose job is to deliver “Obama phones” reports that there are many apparent regularities in the program. For just one example, he delivered 600 of the “free” phones to a single address. (54 minutes)

• There’s a lot of debate about whether or not the Boston bombing was a false flag event. Even the suspects’ mother says that the FBI were following and controlling her sons “for years” — so it’s quite possible that there was intelligence agency involvement. But some conspiracy theories are indeed fantastically speculative. Could the more outlandish theories be planted specifically to discredit anyone who questions the official story? (1 hour 1 minutes)

• The best way to end the insane wars we’re fighting against Muslim countries would be a mutual agreement for both sides to stay out of each other’s countries. But the third party which wants all these wars won’t allow that. (1 hour 26 minutes)

• Some establishment politicians, like Nancy Pelosi and John McCain, have set up pages on social media sites like Facebook. They post puff pieces about themselves, but there is almost no dialogue at all. When critics of the crooked pols speak out on these pages, they are either ignored, vilified, or censored. It is amusing, though, to see how practically no one supports the politicians. (1 hour 32 minutes)

• Recent overt and covert government interventions in the markets have caused a dip in the price of gold. Some observers are saying that this was done to facilitate a payoff to China for reigning in North Korea. (1 hours 40 minutes)

Thanks to N2SAG and N2IRJ and W1WCR, you can listen to the Liberty Net every week — somewhere near 3950 kHz, plus or minus the interference (lately, substantially above that frequency) — every Saturday night at 10PM Eastern Time (and every Wednesday at 9PM), and also via the Internet. You can also download the Liberty Net right here at https://3950.net and listen in your car, at work, or wherever you like. Check in on the air and join the excitement!