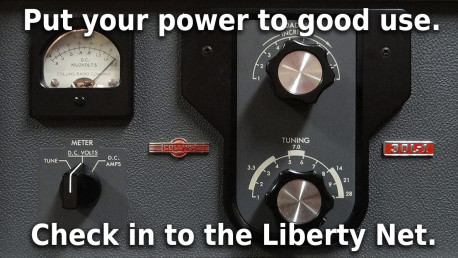 SUPPORTING THE LIBERTY NET is one of the main purposes of this Web site, and the hosting and streaming servers and interactive discussion servers we use are not free. We don’t make any money at this at all, and our rates just went up significantly — so, if you have benefited from 3950.net, why not consider a small donation to support our efforts? Just click on https://3950.net/donate/

Here are just a few of the concepts put forth on the Liberty Net this time:

• More and more people and businesses are locating their servers and data outside of the United States, especially in countries known for their lack of “cooperation” with the Washington regime. Thanks, DC, for trashing a multibillion-dollar industry! (14 minutes)

• Even many of those who supported Obamacare are having second thoughts now that they see it as the naked federal/corporate power grab that it is. Those who want total power over our lives have now floated the idea of outlawing charity hospitals and cash-for-service doctors because they evade their net of absolute control. (21 minutes)

• A recent study of those who disbelieve the government and establishment news sources found that skeptics and “conspiracy theorists” had significantly better mental health than those who accepted the “party line.” And the number of independent thinkers is growing, too. (46 minutes)

• Is it possible that Boy George Bush never left office, and has merely spray-painted himself brown? Just asking. (52 minutes)

• The Texas Department of Public Safety will be rehiring the officer who conducted a totally unjustified roadside “body cavity search” of two innocent women — using the same rubber glove — during a routine traffic stop. The ostensible reason is that the trooper was “following orders” — yet there isn’t even the slightest mention of punishing the officer who gave those orders. (1 hour)

• Are we seeing the total inversion of the original American idea that government is the servant of the people? With the special privileges the elite (and their paramilitary-style “police” agencies) have, such as the “right” to create money out of nothing, the ability to bear and use arms (against us), to use violence (against us) and to arbitrarily detain and incarcerate (us), and to conduct invasive searches (of us) without cause while at the same time demanding total secrecy for their operations, it does indeed appear that American freedom is dead. (1 hour 5 minutes)

• The regime in Washington is now using census data about race to determine which localities are “too White” and should therefore receive “encouragement” (in the form of the withholding of “federal funds” and other penalties) to bring more members of — their term — “protected classes” into the area. (1 hour 23 minutes)

Thanks to N2SAG and N2IRJ and W1WCR, you can listen to the Liberty Net every session — somewhere near 3950 kHz, plus or minus the interference (lately, substantially above that frequency) — every Saturday night at 10PM Eastern Time (and every Wednesday at 9PM), and also via the Internet. Listen to the Survival Net at 9PM Sundays, too! You can also download the Liberty Net right here at https://3950.net and listen in your car, at work, or wherever you like. Check in on the air and join the excitement!