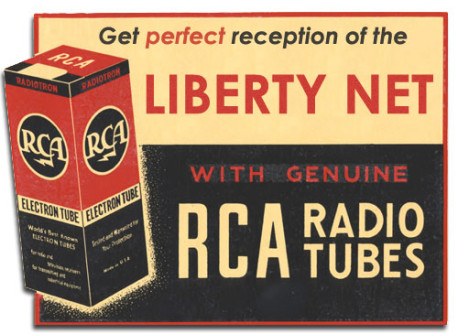 THE LIBERTY NET has no agenda except the free flow of information and an increase in knowledge among free people with free minds. It’s a bracing change from the lies put out by the commercial media’s talking heads — and also from the limited “how’s the weather” and “5-9 good luck in the contest” type of non-communication that the control freaks want to limit us to. Check in today!

Here’s a short summary of some of the topics explored on the net this week:

• As the bankers siphon more and more wealth away from us through their money-creation scam, Americans get poorer and poorer and food portions in the stores get smaller and smaller. Some manufacturers have even taken pains to design new containers that look like, say, the old gallon container — but only hold less than half that amount. (19 minutes)

• Now that “full time” employees must be given a huge list of benefits “guaranteed” by the regime in Washington, guess what? — there are practically no full-time jobs available any more. Time to keep all coercive third parties — like the regime — out of employment agreements, and put the rapacious bankers and their near-monopoly megacorporations out of business too. (31 minutes)

• Why are millions of Muslims being imported into the West? Those who opened the gates to them, being largely Zionist, have no love for them. The real reason is to foster the destruction of our race, and to distract us from the real power that oppresses us by keeping us busy fighting Muslims. (47 minutes)

• The American Preparedness Radio Network has constructed a new email system that is entirely independent of the Internet. (50 minutes)

• The cheating of consumers on portion sizes referred to earlier only works when the buyer is hooked on a name brand. It’s easy to make a “Hershey Bar” or “Coke” smaller — but it’s awful hard to make an ounce smaller. (Though I must admit they have the boobs so thoroughly fooled that they can make the dollar smaller every week, and hardly anyone gets it. There’s no reason why the dollar can’t be as stable as the foot or the pound.) (58 minutes)

• You’d think Western Christians would have some sympathy for the killings of Christians carried out recently by the “Syrian rebels” who are funded by the Washington regime. The Assad government never allowed such atrocities. (1 hour 2 minutes)

• Americans — and the Israeli fanatics who control them — should be ashamed of what they’ve done to the Middle East, much of which is now a smoking, devastated ruin. (1 hour 7 minutes)

• It’s been exposed by insiders: Fox News left/right debates are staged, no more real than professional wrestling bouts. These people are actors working for the bankers and their tribe, and their purpose is to pretend to be in opposition, to pretend to fight, to pretend to lead — so that viewers are never given any real alternative to the System. (1 hour 14 minutes)

Thanks to N2SAG and N2IRJ and W1WCR, you can listen to the Liberty Net every week — somewhere near 3950 kHz, plus or minus the interference (lately, substantially above that frequency) — every Saturday night at 10PM Eastern Time (and every Wednesday at 9PM), and also via the Internet. You can also download the Liberty Net right here at https://3950.net and listen in your car, at work, or wherever you like. Listen to the Survival Net, Sundays at 9PM, too. Check in on the air and join the excitement!