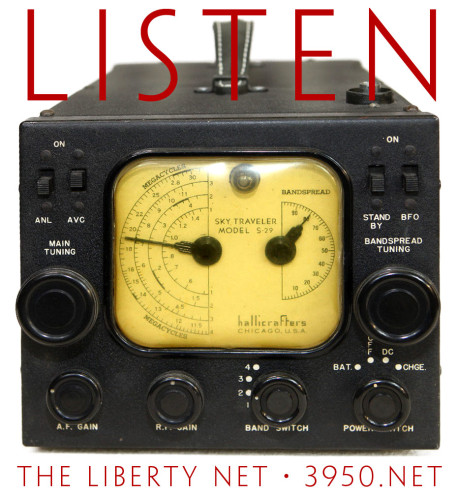 THE LIBERTY NET exemplifies the purpose of the amateur radio service: It serves, beyond any doubt, the public interest, convenience, and necessity. It’s a way for amateurs to share ideas and experiences in a way that no other communications medium can match.

• We’ve already ripped our country and civilization apart by importing Semitic religions — so why add another Semitic religion, Islam, to the mix? Sounds like a guarantee of bringing the all the Semites’ perennial blood feuds into our borders. As is said quite often on the Liberty Net, the US needs to get out of the Middle East, and the Middle East needs to get out of the US (and that means Torah and Talmud believers along with Koran believers). (10 minutes)

• It’s now been 46 years since White America sent men to touch the surface of another world. In the time since then, America has become a multiracial cesspool, and the manned space program has been all but abandoned. (14 minutes)

• There are several new Adobe-Flash-based malware programs “in the wild” at the moment, so it might be wise to limit your use of Flash plugins until a security update can be produced and installed. (17 minutes)

• Have you heard of the new name for establishment conservatives and Beltway Republicans? They’re now being widely referred to as “cuckservatives,” a reference to how they’ve been cuckolded by the anti-White left. They’ve totally sold out the interests of their main constituency, who are now being replaced racially in an obviously genocidal program, and preen and congratulate themselves for doing exactly that. (28 minutes)

• One of the main effects of the secret “trade agreement” pushed through by those same cuckservatives will be to massively increase non-White immigration. (30 minutes)

Remember that you can find — and check in to — the Liberty Net on or near 3995 kHz every Saturday night at 10PM Eastern Time, or you can listen live on the Internet  at the “Liberty Net live” links in the left column of this site — or listen whenever you like on your player via the mp3 files posted here at https://3950.net every week. (And don’t forget the Survival Net on Sundays and the Midweek Liberty Net on Wednesdays, all at 10PM Eastern.)