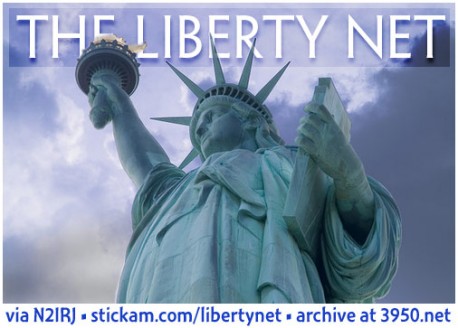 • In an effort to prevent a catastrophic (and justified) fall in demand for U.S. government debt, the Federal Reserve is frantically handing out interest-free money to commercial banks with an unwritten “gentleman’s agreement” that the interest-free funds will be used to buy interest-bearing Treasury bonds. (1 hour 3 minutes)

• A criminal called “Brute Jack Rhodes,” a 240-lb Black male who preyed repeatedly on elderly White women in walkers, was unrepentant as he was recently sentenced to 75 years in prison — one year for each dollar he stole from three of his victims, one of whom was over 100 years old. (1 hour 32 minutes)

• A predominantly White area of northern Atlanta is making moves to secede from that Black-run city of chronic crime, filth, and blight. Naturally, Atlanta’s Black establishment opposes the former Milton County’s move to become independent again. A major factor in the dispute is that many Whites are tired of seeing their tax money being used to subsidize an ever-growing, largely criminal, and unemployable underclass — and the establishment doesn’t want to lose its “tax base” (another word for modern-day slaves). (1 hour 35 minutes)

• America is being bankrupted and engulfed in criminality due to massive, and largely illegal, non-White immigration. (1 hour 47 minutes)

• The TSA’s full body scanners raise the issue of government employees looking under the clothes of our family members — and there is a disproportionate number of sexual deviants in government employment, perhaps due to the mentality of wanting to dominate others. It has also been alleged that the terahertz waves emitted by full body scanners resonate with and can damage DNA by literally “unzipping” it, raising the spectre of induced illness in, or sterilization of, those who must travel by commercial airlines. It is also interesting to note that dual-loyalist operative Michael Chertoff has a personal financial interest in the sale of full body scanners. (1 hour 57 minutes)

• Mike Huckabee now suggests that we outsource all of our transportation security to Israel, a garrison state without the slightest pretense of constitutional rights. (2 hours 5 minutes)

• Is it true that all of our current wars in the Middle East, and the “War on Terror” generally, are just setting America up for an eventual merger with the state of Israel? Such a merger with the quintessential “national security”/surveillance state would spell the final end of freedom in the U.S. (2 hours 6 minutes)

• Is all the over-the-top hysteria about the failed Underwear Bomber just an excuse to get the boobs pepped up for yet another war, this time in Yemen? (2 hours 32 minutes)

• The state of Michigan is imploding financially — in some areas, they’ve even ceased plowing the roads. As the financial house of cards collapses, a few sympathetic bank employees are refusing orders to evict mortgage defaulters, knowing that many could suffer or die homeless in the severe cold. (2 hours 42 minutes)

• Are Muslims being used as the “ideal bogeyman” to turn America into a garrison “national security” state like Israel? Who brought them here in such large numbers, after all? And who is pushing for the Middle Eastern wars that fan the flames of their hatred of us? (2 hours 46 minutes)

• Concerns over global warming have been used to institute a huge power grab — which is truly a war on the rights of the people. Scientific fraud has been used to justify this power grab, which actually amounts to a new tyrannical world government and a new system of debt based on “carbon credits.” Interestingly, Maurice Strong, the progenitor of many of these ideas, now lives in Beijing. (2 hours 49 minutes)

• What the mainstream media reported about the recent climate conference is very different from what really happened there. (3 hours 11 minutes)

• Jesse Ventura now states he was ordered to attend a secret meeting with 23 CIA and other intelligence operatives very soon after he was elected governor of Minnesota. (3 hours 49 minutes)

• “Infraguard” is a massive domestic spying program which recruits Americans to spy on their neighbors for the regime in Washington. The sooner the American people lose their loyalty to that regime, the better for all of us. (3 hours 51 minutes)

• A cost breakdown reveals that the Obama health care plan includes a substantial marriage penalty — over a 50 per cent. increase at $5,000 per year. An administration spokesman claims “we can’t avoid that because we’re trying to direct most of the benefits to those who really need them.” That’s actually a code phrase for directing money away from normal families and to dysfunctional “alternative lifestyle” practitioners who form a significant part of the Obama coalition. (4 hours 0 minutes)

• It’s underreported in the mainstream media, but Africans — supported by organized crime — are rioting and attacking White people in Italy. White workers and parents who defended themselves and their children are described in the controlled media as “gangs.” Italy’s Northern League blames the violence on illegal immigration. (4 hours 3 minutes)

• A Russian Orthodox delegation visited Putin, asking that all illegal non-Christian (read: Asian and Muslim) immigration be stopped. Putin’s response was “Convert them to Orthodoxy.” This is always a danger when you define your identity by religion rather than by biology: you can still be replaced and driven to extinction, as long as your adversaries “believe” (or pretend to believe) as you do. (4 hours 8 minutes)

• The next item on the Washington regime’s agenda is a massive amnesty for non-White immigrants — and dual citizenship will be a built-in feature of the plan. Thus the elite class and the scab labor class will have all the perks of dual citizenship — the one mainly with Israel and the other mainly with Mexico — while “plain vanilla” Americans will have very little say about the future of their nation. (4 hours 17 minutes)

• In an interesting admission, Harry Reid stated on the record that Obama is more palatable than other African politicians, since he is “light skinned” and does not use “Negro dialect.” (4 hours 20 minutes)

• There may be huge non-compliance with the proposed health care laws, since more and more people regard the federal government’s actions as unconstitutional, illegal, and counter to our survival needs. (4 hours 25 minutes)

• The Icelandic people, in a nationwide referendum and in opposition to their legislators, have absolutely refused to bail out the international bankers. Some bankers in Britain, angry at the Icelander’s “reneging on their debts” (which really means their refusal to be ripped off), are suggesting that Icelandic account holders be declared “terrorists” for refusing to pay, allowing their accounts to be seized. Such acts may backfire on the bankers, as more and more people will connect the dots and begin to see that our wars in Pakistan, Afghanistan, and Iraq are also against peoples who refuse to participate in the usurious banking system. (4 hours 29 minutes)

• Isn’t Goldman Sachs a far more dangerous enemy of the American people than al-Qaeda ever was? (4 hours 49 minutes)

• Is it possible that Arnold Schwarzenegger is being blackmailed and controlled by threats to expose his past connections with White racial activists? (5 hours 23 minutes)

In addition to listening to these Liberty Net recordings online (either live via N2SAG or N2IRJ or time-shifted here), you can also download them and play them on your portable mp3 player — commuting time can be excellent Liberty Net listening time.

Check-ins begin at the 11-minute mark, and the legal obtaining of the frequency is documented at the very beginning of the recording, the total length of which is 6 hours 10 minutes.

Thanks again to N2IRJ, Marty, for making these recordings available to us all!