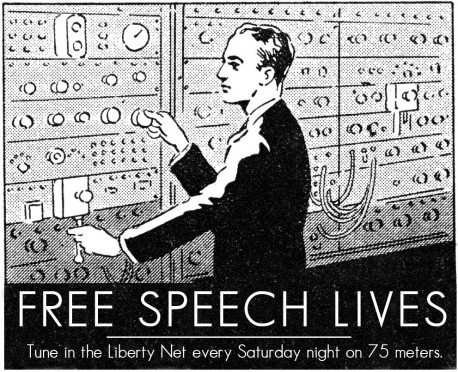 THERE WERE some propagation anomalies that affected the Liberty Net this week, but check-ins these days are from so many different areas that the conversation and debate is always vibrant — whether the skip is short or long.

Here are just a few of the topics discussed on the Liberty Net this week:

• In an under-reported environmental disaster, a bizarre extreme cold front has caused large numbers of wildlife deaths in Argentina and Bolivia. (1 hour 17 minutes)

• Why hasn’t Obama been held to account for failing to end the wars for Zionism in the Middle East? Why are Americans letting him get away with “reclassifying” soldiers — on paper only — to make it look like troop levels are lower? (1 hour 39 minutes)

• A courageous and decorated military flight surgeon is risking his career to expose the illegitimacy of the Obama presidency: He has refused deployment to the illegal war in the Middle East on the grounds that no order from Obama can be legal. He has been imprisoned without trial and is now prevented from speaking to anyone, including his lawyer. What is the regime in Washington so afraid of? (2 hours 5 minutes)

• More evidence is emerging that Obama’s records have been “cleansed” of the evidence that he was, and possibly still is, a citizen of a foreign country. By the laws of biology and of the Founding Fathers, of course, he could never have been an American citizen, regardless of where he was born — a nation is a biological entity, not a geographic one; and the Founding Fathers explicitly stated that only those of European descent could become Americans. (2 hours 8 minutes)

• Is the government serious about the so-called “law” that forbids us to collect our own rainwater? Or are they merely testing us to see how far they can push their tyranny? (2 hours 29 minutes)

• Will another false flag terror event be engineered so that a new war (against yet another of Israel’s enemies, this time Iran) can be started? Will this cause Obama to gain “bi-partisan” support since he would become even more of a “war president”? (2 hours 39 minutes)

• Should Fannie Mae and Freddie Mac be liquidated and abolished? (2 hours 40 minutes)

• Will selective “credit forgiveness” for certain voting blocs and minority groups be used as a vote-getting tool in the next election? Why shouldn’t most “credit” be forgiven anyway, since it’s based on money created out of nothing? (2 hours 42 minutes)

Join in or listen to the most exciting net on the amateur bands every Saturday night — within 10 kHz or so of 3950 SSB, starting at 10PM Eastern Time.