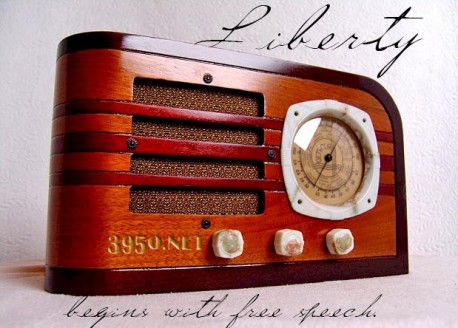 2012 is beginning as a real growth year for the Liberty Net, as the number of check-ins and the length of the weekly sessions keep growing. Always remember that my summaries here can only barely touch on the subject matter brought up — and give only a hint of the honest and heart-felt way it is presented.

Here’s a small selection of what you can hear on our latest recording:

• Iceland refused to bail out the banksters and was threatened with severe retaliation. So far, there’s been no severe effect and business is quite good in that plucky, independence-loving nation. (10 minutes)

• The most fraudulent holiday with the phoniest “hero” ever vended to us by the regime has got to be “Martin Luther King Day.” See http://www.youtube.com/watch?v=EELhEguhU8M for more details. (17 minutes)

• The regime is spending $1.6 million to restore six “Chicano murals” in San Diego which promote the takeover of California by Communists and Mestizos. Ostensibly, this project is “enhancing the transportation infrastructure” of the region. (21 minutes)

• Hats off to the developers of the Firefox plugin “De-SOPA,” which automatically routes you around any governmental interdiction of “forbidden” domain names. (53 minutes)

• There’s a war going on in Chihuahua, Mexico — and more people have been killed there than have been killed in Afghanistan. Why, then, are we sending troops to protect the unworthy state of Israel all over the Mideast when this conflict in nearby Mexico is spreading into our own nation? (54 minutes)

• Iceland isn’t the only country that’s pushing back against the bankers’ rape of Western economies: In Ireland, there is a growing “Not Our Debt” campaign, which is fighting the tax-funded bailouts of the misleadingly-named “Anglo-Irish Bank.” (1 hour 6 minutes)

• Want to really understand the brouhaha about the Keystone Pipeline? Think oil going to China — and Chinese-held dollars going to Canada. (1 hour 24 minutes)

• Unnatural foods — and the omnipresent high fructose corn syrup — are taking a toll on our health, and probably our mental functioning too. The average weight of an American woman in the 1950s was 112 pounds. It is now 168. (1 hour 38 minutes)

• There’s now a smartphone “app” which helps pedestrians and drivers avoid high crime areas. Of course, since everyone knows that “high crime areas” are areas where non-Whites of equatorial origin live in large numbers, the app has been decried as “racist.” What is really needed for such areas is an app which converts your smartphone into a .38 caliber revolver. (2 hours 3 minutes)

You can find the Liberty Net on 75 meters, almost always somewhere between 3950 and 3999 kHz SSB, every Saturday night at 10PM Eastern Time. Please check in, and also listen and chat live on the Internet via https://3950.net/live every week. The full audio files are usually posted to our archive on the Sunday morning following the net — you’ll always see the latest file near the top of the right column — just click to listen or download.