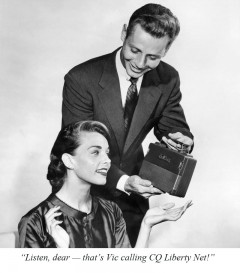 IT’S NOT ALWAYS EASY to find a clear frequency for the Liberty Net, but one thing you’ll notice is that our net is one of the very few that does not merely fire up on an accustomed frequency, but instead is frequency-flexible. That means you’ll have to search for us — almost always between 3950 and 3990 kHz LSB — but W1WCR’s signal is strong and distinctive, so we shouldn’t be too hard to find.

• Be prepared for even more inflation as the Fed, and the banks that control it, start more “quantitative easing” under the banner of “QE3” — meaning that the oligarchs will get trillions in free money, while the people hold fewer and fewer dollars, each of which is rapidly dropping in value. (14 minutes)

• More and more companies, though nominally “private corporations,” have in reality become creatures of the banks because of the mountains of debt that have been loaded upon them by corporate raiders. (22 minutes)

• Even though the Jewish power structure is the main backer of multiracialism and unlimited immigration into the formerly-White West, in Israel itself there are stricter and stricter controls on immigration, and intermarriage between Jews and members of other races is legally constrained. (27 minutes)

• Speaking of Israel, why is it that we spend trillions of dollars and sacrifice thousands of lives in fighting wars for that country — yet they do not contribute a single soldier or a single dime to those efforts? (32 minutes)

• The load of debt that the bankers have placed on the backs of European countries has resulted in at least a half dozen of them now having credit ratings as low as that of Kazakhstan. (39 minutes)

• It’s amazing the lengths to which the Republican establishment — which is controlled by the same money-men who control the other party and the major media — will go to denigrate Ron Paul and minimize his successes. (47 minutes)

• One of the most brilliant up-and-coming artists active today is David Dees of Dees Illustrations ( http://www.deesillustration.com/ ). His works can make a complex political or philosophical point evident in a single glance, and have the ability to move our hearts and uncloud our eyes in a way that no written or spoken text can ever do. (52 minutes)

• There is a revolution brewing in the life extension field — telomere reset therapy, developed in part by Cold Spring Laboratories, promises to reduce or even eliminate cell senescence. (1 hour 5 minutes)

Remember that you can find — and check in to — the Liberty Net on a clear frequency around 3950-4000 kHz LSB every Saturday night at 10PM Eastern Time, or you can listen live on the Internet  at https://3950.net/live — or listen at your leisure via the mp3 files posted here at https://3950.net every week.

Thanks to W1WCR for running the Liberty Net, and thanks to all of you for checking in and making t net what it is today!