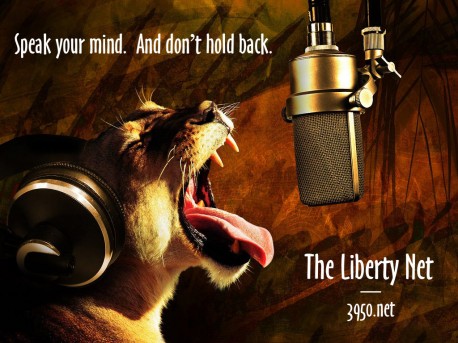 THE LIBERTY NET has been through several transitions, from its early days in the 70s, through the dawning of the Internet and digital recording, and now enhanced through full integration with VoIP and Web 2.0 technology. These additions let amateur operators who are temporarily off the air participate, and the online streaming and archived recordings make the net almost impervious to jamming.

Here’s a sample of what you’ll hear on this week’s Liberty Net recording:

• A court in Georgia has ordered the current occupant of the White House to appear and answer questions about his qualifications to serve as President. Obama, however, has brazenly flouted the order, saying through his mouthpiece that he was “terminating his participation in this proceeding.” (23 minutes)

• A textual analysis of the latest State of the Union address indicates that it was written to match an 8th grade level of comprehension. (26 minutes)

• Some states, like Illinois, in their zeal to outlaw the use of cell telephones while driving, have perhaps inadvertently outlawed mobile amateur radio use. The law in Illinois exempts “emergency” and “law enforcement” radio users, creating the dangerous precedent of a privileged class for which there is no possible legal justification. (56 minutes)

• ACTA, the “Anti-Counterfeiting Trade Agreement” is being quietly pushed through Congress. It will empower the regime in Washington — and even other governments — to shut down any Web site they choose, making it even more dangerous than SOPA and PIPA. (1 hour 16 minutes)

• Just as he is becoming increasingly vocal in his support of Ron Paul, radio host Alex Jones seem to be getting more and more over-the-top hysterical about other issues during his radio show. Is this a coincidence? (1 hour 21 minutes)

• Some are predicting that within two decades, 90 per cent. of the Washington regime’s air forces will be robotic, and 70 per cent. of its ground forces will be at least partly robotic. If we get our country back again, we need a Constitutional amendment forbidding such weapons from ever being used against us. (1 hour 23 minutes)

The Liberty Net is a gathering that includes thoughtful, philosophical minds and well-informed sources every week, and any amateur operator can join in the discussion and debate. A big “thank you” to W1WCR for his hard work which makes the Liberty Net  possible. You can download an mp3 recording of the Net right here at https://3950.net and listen in your gym, or on your way to work, or anywhere you choose.