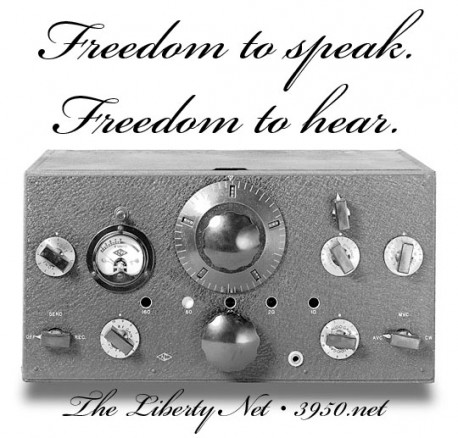 AS SNOW ENVELOPS much of North America, travel may be impeded — but radio wave propagation is enhanced. This results in some excellent Liberty Net conversations, as this week’s recording makes clear. Why not check in yourself this week?

Here are just a few of the ideas offered for debate on the net this week:

• If teachers were armed in every school — which would be far cheaper than hiring more policemen, or buying the useless spy cameras which do little more than show us the carnage after the fact — school shooting tragedies would become extremely rare. Of course, such a plan would only work in the civilized communities which are gradually disappearing as America’s founding race becomes a minority. (25 minutes)

• Why are elitists like Dianne Feinstein — who are wealthy enough to hire their own private armed guards — the very first to call for working people to be disarmed? (1 hour 2 minutes)

• Pay close attention to the sponsor lists and network affiliations of supposedly “alternative” media sources, and you’ll find that many of them are owned and controlled by the same ethnically distinct billionaires that own almost all major media. Rush Limbaugh, for just one egregious example, is fed via ABC/Disney network lines. (1 hour 4 minutes)

• America fell off the “fiscal cliff” almost exactly 100 years ago. The current brouhaha of the same name is just media hype to soften up the boobs for higher taxes, more slavery, and a total loss of financial freedom and privacy. (1 hour 12 minutes)

• If you (or anyone else who isn’t a bank) did what the commercial banks and the “Federal Reserve” do, you would be arrested and prosecuted for check kiting, fraud, and theft. (1 hour 17 minutes)

• The financial elite (and the worthless underclass, to whom the elite throw a few crumbs to retain their votes) use inflation to steal trillions of dollars from senior citizens and productive working people. There is no reason why the theft could not be ended by making the dollar as stable as the inch or the mile — except for the desire of the parasites to keep on stealing. (1 hour 24 minutes)

• Why are the bankers allowed to operate their Federal Reserve — and control the people’s currency and credit — in secrecy? Why are they afraid of a public audit? (1 hour 30 minutes)

• As the System goes from bankruptcy to deeper bankruptcy, its minions’ mouths are watering to find some legal pretext to seize private pension funds. (1 hour 38 minutes)

Thanks to W1WCR for running the Liberty Net for almost four decades!