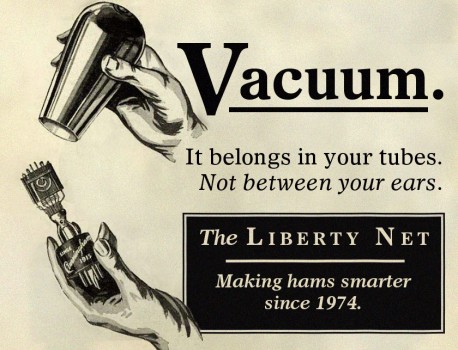 MARTY, N2IRJ, remains off the air in the aftermath of Hurricane Sandy, and an injury and other setbacks have impaired his ability to restore his damaged station. Recovery is progressing, albeit slowly, and his transmitter and computer are now functioning, though pain prevents Marty from regularly checking his email. Antenna repairs are still to be made. Marty sends his thanks to those who have written him. Your kindness will always be remembered.

Here are just a few of the ideas presented this week for discussion on the Liberty Net:

• When shootings — just as fatal as the one in Connecticut — take place in Chicago, as they do hundreds of times every year, it hardly makes the news. And there is plenty of draconian “gun control” in Chicago. (7 minutes)

• What is the matter with the mental functioning of the American people who, when confronted with an emotion-laden tragedy like the recent school killings, think that the solution is yet another law? Hint: Murder is already illegal. (8 minutes)

• Is the legalization of marijuana a means of further lowering the IQ of the American people? Will marijuana use actually increase if the laws against it are repealed? Is legalization a welcome first step to ending the “drug war” power structure of the Washington regime? (31 minutes)

• If the ordinary personnel in our schools were permitted and encouraged to wear sidearms, the tragedy in Connecticut would most likely never have occurred. (37 minutes)

• In the totally evil 90-percent-White, pre-media-saturation, pre-psychiatric-drug America of 50 years ago, thousands of children brought guns openly to school to participate in sporting or target-shooting clubs, left them in their lockers, and nothing untoward happened. (40 minutes)

• It is estimated that the Communist Chinese have bought over seven billion dollars worth of US real estate in recent years. And that’s just the beginning. (1 hour 1 minute)

• The “fiscal cliff” is just a meme used by both the Republican and Democrat branches of the Washington regime to scare us into giving them more power. The truth is that we went over the fiscal cliff many, many decades ago when we gave the bankers — and the ethnic power structure to which most of them belong — absolute power over us. (1 hour 11 minutes)

• Where do susceptible people get the idea of making human beings a target for killing? The “gun culture” of gun stores, sport, home protection, and target ranges? Or from violent movies, television programs, and “first person shooter” games? (1 hour 27 minutes)