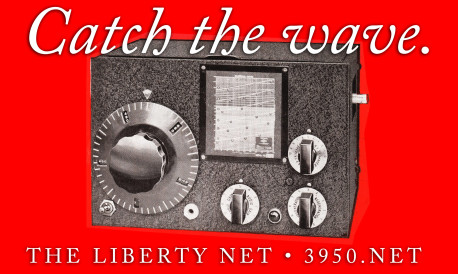 • Now that the regime is trying to federalize health care, will they pull the same trick as the military — putting former soldiers with possibly “incorrect” opinions on the NCIS “no buy” list so they can’t buy a gun, even though they never had any legitimate psychological problems justifying such an action? (25 minutes)

• Now that the regime has entrenched itself in power with the votes of aliens, “legal” and illegal, there is no hope to be found in electoral politics for the remaining Americans. Think secession. Think civil disobedience. Think monkey-wrenching. Think revolution. (35 minutes)

• Larry Nichols has now confessed to carrying out beatings and murders-for-hire while working for Bill Clinton. (48 minutes)

• Guess who was supporting and in attendance at the recent pro-illegal-alien rally on the Mall in Washington — yes, the one that took place when the veterans were turned away. None other than the internationalist oligarch and owner of Fox News, Rupert Murdoch. (55 minutes)

• According to a recent poll, the pro-White Front National is now the leading political party in France. Reason to celebrate! (1 hour 2 minutes)

• A new genetic study shows that 80 per cent. of the mitochondrial DNA of Ashkenazi Jews comes from European women — and not from the Middle East; indicating that this particular branch of semi-semi-Semites has a very tenuous claim indeed to being “chosen,” or any more deserving of Palestine than the real Semites who have lived there for millennia. (1 hour 6 minutes)

• One reason the ever-proliferating “NGOs” (Non-Government Organizations) are being funded by the billionaires is to foster “social change” in any country which dares to oppose the banker/corporate/Zionist agenda. In Hungary, the Jobbik Party has proposed a law requiring all NGOs to reveal their sources of funding. This has enraged one NGO, the Bilderberg Group, which has retaliated by using its billions in an attempt to invalidate the recent election which saw Jobbik enter the legislature. Russia has also passed a similar law, so expect more “hate Russia” propaganda from the controlled media soon. (1 hour 10 minutes)

Remember that you can receive the Liberty Net in the area of 3950 kHz (recently, 3995 has been used often) and above every Saturday night at 10PM Eastern Time, Wednesdays at 9PM — and don’t forget the Survival Net at 9PM on Sundays. Or listen live on the Internet (see the two “Liberty Net Live” links in the left column of this site for two live streaming sites with associated discussion rooms). And you can listen at your leisure via the mp3 files posted here at https://3950.net every week. Each night’s mp3 file is usually posted the next morning and will be visible that day in the upper right column of this site.