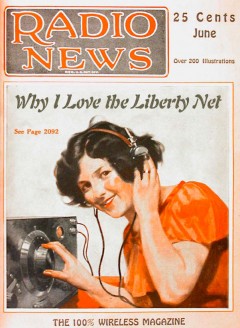 • One Liberty Net regular visits China often, and operates BY1SK when there, talking mainly to English-speaking Russian amateurs. He says that China has warned American politicians repeatedly about our excessive debt. (1 hour 11 minutes)

• During the Depression, there was deflation, meaning that the value of the cash in your pocket got higher and higher. Today, we have the opposite situation, and it is a misconception to say “prices are rising”: In reality, the value of the dollar is going down. (1 hour 12 minutes)

• When a Liberty Net personality visited Cuba recently — and agreed to make some broadcasts over Radio Havana — he observed that as Cuba moves away from state socialism, the US moves in the opposite direction. (1 hour 16 minutes)

• Why are we still killing people in Afghanistan and Pakistan when no legitimate purpose is served — and there is no way to “win.” (1 hour 27 minutes)

• Investors are fleeing dollar-denominated investments in large numbers, since the banking system (which includes but is not limited to the Fed) has been creating bogus dollars at an ever-increasing rate under the deceptive name of “quantitative easing.” (2 hours 57 minutes)

• One Liberty Net participant gives us a report of his attendance at the Rand Paul victory party, where he was interviewed by National Public Radio and two other broadcast networks. (3 hours 45 minutes)

• It is unconscionable for the regime in Washington to cancel the cost of living adjustment for poor people who have contributed to the fraudulent Social Security system all their lives, while at the same time literally giving endless billions of dollars to the bankers.  (4 hours 10 minutes)

Thanks to N2SAG and N2IRJ and W1WCR, you can listen to the Liberty Net every week — on 3950 plus or minus several kHz — every Saturday night at 10PM Eastern Time, and also via the Web. You can also download the Liberty Net right here at https://3950.net and listen in your car, at work, or wherever you like.