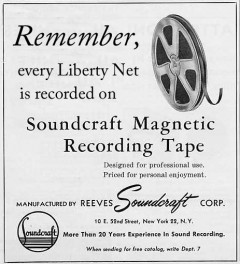 SOMETIMES OUR CONVERSATIONS, both on and off amateur radio, seem like a vast wasteland of empty chatter, small talk, and gossip — but that can’t be said of the conversations on the historic Liberty Net. Some of the most aware and articulate people I’ve ever known are regulars there. Taking part in Liberty Net conversations is a direct connection to bright minds and new perspectives — perspectives that often are suppressed or vilified by the billionaires’ media.

• The protests aren’t just on Wall Street: In Israel — on Rothschild Boulevard, no less — one of the protestors against the financial oligarchs, many of whom have connections to that country, actually erected a guillotine. (18 minutes)

• Only 13 senators had the courage to vote against the outrageously illegal so-called “National Defense Authorization Act” (NDAA), which strips us of our most fundamental constitutional rights. There is a patriotic movement afoot to have the 86 who voted for it removed from office. (22 minutes)

• A better name for the NDAA would be the “Bill of Rights Cancellation Act.” (32 minutes)

• The phoniness of the American political system — no more authentic than the Soviet one, really — is proven by the recent statement by Republican party leaders in Iowa that they would “take care” of Ron Paul — according to some observers, by faking the vote tally if necessary. (37 minutes)

• A town in Spain has re-legalized the use of that country’s pre-Euro currency, the peseta — to the great benefit of the area’s economy. What more proof is needed of the benefits of interest-free money — of the ideas propounded in the book Social Credit? (40 minutes)

• Insolvent industries get shut down. Insolvent businesses stop operating. Insolvent individuals go through bankruptcy and foreclosure. Why, then, do certain insolvent banks go on operating and get trillions upon trillions of dollars in free money? (50 minutes)

• Despite — or perhaps because of — the fact that labor unions are banned in Communist China and the fact that millions are virtually enslaved there, the Washington regime strongly favors their colleagues in Beijing, who own so much of “our” debt. In case the figureheads who run the oligarchs’ plantation in America get any ideas about being independent, the Chinese Communists have linked their currency in lockstep to the US dollar, so no adjustment of the exchange rate can ever be made. (1 hour 21 minutes)

• So-called HD Radio is a farce which has caused the failure and bankruptcy of countless radio stations. But why was such an inferior digital system pushed on broadcasters and listeners? Who profits? (2 hours 11 minutes)

You can find — and check in to — the Liberty Net every Saturday night starting at 10PM Eastern Time (in recent weeks, the frequency has been well above 3950 SSB — and has often been around 3980 plus or minus several kHz). You can also listen live on the Internet via https://3950.net/live — or listen at your leisure via the mp3 files posted here at https://3950.net every week.

Remember that the complete net recording is posted at the very top of the right column (under “Liberty Net Audio”) here on https://3950.net — usually on the Sunday immediately following the net, so look for it there if you’d like to listen after the net has closed. These articles and summaries (found in the center column) show up a few days to a week later.