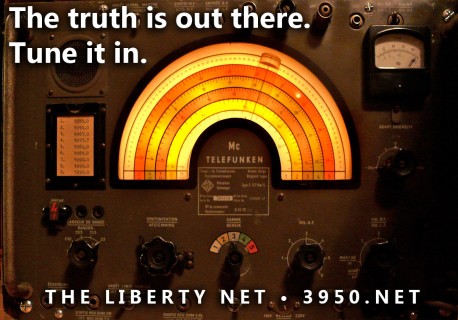 THE LIBERTY NET is one of the few nets that practice frequency agility, not only as a method of evading interference — but also as a way to avoid causing interference. So, even though the net has been operating on 3983 and 3986 kHz in recent weeks, we might be found anywhere from about 3950 up to 3999 on any given week. Luckily, the Net Control Station, W1WCR, has a distinctly strong signal all over North America and his “call for check-ins” is easily found. So what are you waiting for? Check in this Saturday night!

Here is a small sampling of the issues up for debate and discussion on the Liberty Net this session:

• Isn’t it interesting that so many of the gun-grabbers are packing guns themselves — or have heavily armed bodyguards — or are using countless deadly weapons to kill innocent people in foreign countries? (13 minutes)

• Why are the employees of the DC regime — and their union — saying little or nothing about Congress’s illegal seizure of their pension funds? (21 minutes)

• Does anyone else experience cognitive dissonance when considering that the same people who want to disarm ordinary American citizens are eager to arm both Israel and the Muslim Brotherhood? (30 minutes)

• It’s time to immediately end the blacklist that causes the firing, shaming, unemployability, and sometimes false prosecution of those who believe that the White race has a right to exist — and who have ever dared to say so. (38 minutes)

• Stockgumshoe.com is a site that analyzes the half-truths, teasers, hype, and promotions that are so common in the investment world. (41 minutes)

• The bankers and their politician employees have debased the dollar so much now that the penny can no longer be made of copper — because that much copper is worth far more than a penny — and the copper and nickel in nickels has recently risen in value (as measured by the bankers’ phony money) to considerably more than five cents. (44 minutes)

• Just as Boy George Bush is a faux, pretended Texan, Barack Hussein Fetchit is a synthetic, pretended American. Both are creations and functionaries of the oligarchs. (1 hour 11 minutes)

• A dollar collapse will be preceded by a huge influx of foreign-held dollars as foreigners acquire American businesses and property simply because they don’t want to be the “last holder” of an asset about to lose most of its value. This influx will briefly create a flurry of positive statistics that the Usual Suspects will tell us is a “recovery.” (1 hour 52 minutes)

The Liberty Net is on the air every Saturday night at 10PM Eastern Time somewhere above 3950 kHz SSB (lately it’s been higher in frequency to avoid causing interference, often near 3983).

Remember, thanks to N2SAG and N2IRJ and W1WCR, you can listen live — and “text” live — via the Web whenever the Liberty Net is on the air; just check out the ‘Liberty Net Live’ streams in this site’s left column. And, as always, you can download the net recordings right here at https://3950.net and listen at your leisure.