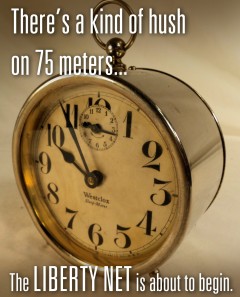 • The Founders wanted a society favored by the leadership and knowledge and kindness and talents of what they called “natural aristocrats” — meaning not necessarily those with artificial titles, but those with natural, inborn talent and virtue. What they did not mean is what we have now: rule by lowlife thugs and criminals. (1 hour 23 minutes)

• When we notice Fetchit’s Lincoln obsession and his desire to be remembered as a “great figure” in the history books, we should always remember that contemporary history books are written by the victors, and invariably make mass-murdering monsters into official “heroes.” (1 hour 27 minutes)

• The “Gun Free Zones” that our enemies have created should really be called “Crime Opportunity Zones,” or, better yet, “Killing Zones” — since the bad guys (including operatives of the tyrants’ Washington regime) know that we will be defenseless in such places. (1 hour 50 minutes)

• Violent crime in America does not correlate with gun availability at all — but it does correlate very closely with the number of non-Whites in a given area, as statistics clearly show.  (1 hour 54 minutes)

• Why is the daily violence in Chicago and our other major cities not a major, ongoing news story? Could it be because the pervasive “gun control” there, and the ethnic dimension to the violence, simply don’t fit the anti-White agenda being pushed by the billionaire oligarchs? (2 hours 14 minutes)

• Despite being almost entirely a creation of the Tea Party movement, Marco Rubio has betrayed his supporters and sold out to the oligarchs (and their Chamber of Commerce allies) and supported the acceleration and legalization the Mestizo invasion of the United States. It’s also sad to see a man who is as White as Ward Cleaver pretend to be a “minority” to gain political advantage in our sick society. (2 hours 22 minutes)

Thanks to N2SAG and N2IRJ and W1WCR, you can listen to the Liberty Net every week — somewhere near 3950 kHz, plus or minus the interference (lately, substantially above that frequency, and often near 3983) — every Saturday night at 10PM Eastern Time, and also via the Internet. You can also download the Liberty Net right here at https://3950.net and listen in your car, at work, or wherever you like. Check in on the air and join the excitement!