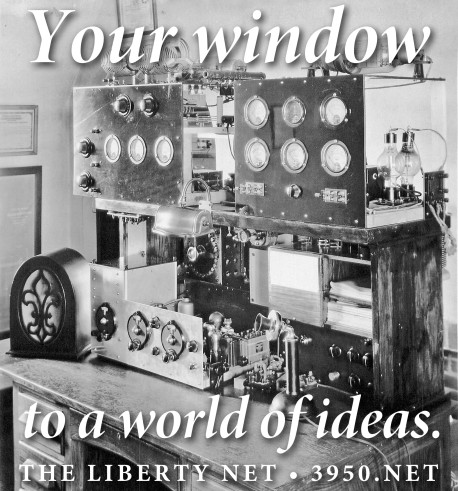 FEWER AND FEWER Americans get their news from the controlled media — and more and more are watching and reading alternative news sources not under the thumbs of the oligarchs. Check in to the Liberty Net, and you can speak directly with intelligent consumers of — and contributors to — the free media that have bloomed in recent years.

• Think “digital rights management” of mp3 music is annoying and ridiculous? It gets worse. Even coffee machine manufacturer Keurig is now adding features that will prevent you from using any other brands of coffee, filters, or cups in future models of their coffee brewers. (16 minutes)

• When Microsoft ended support for Windows XP recently, thousands of banks who use the operating system were left in the lurch. When hackers develop new exploits for XP, Microsoft won’t being providing any patches or fixes. (19 minutes)

• Auto manufacturers were once required to supply replacement parts for 20 years after a vehicle was manufacturers. In the 1980s, that was changed to seven years. In recent years, companies are often failing to even do that, despite the law. (36 minutes)

• Not only do the auto manufacturers profit from planned obsolescence — printer manufacturers are particularly egregious in this regard. They not only have ink cartridges that have “sensors” that say they’re empty when they’re not, but some of them now have purposely-embedded “expiration dates” that stop them from working even if they’re full of ink! (39 minutes)

• It’s becoming increasingly evident that much of the chaos and death in Ukraine was directly caused by US- and oligarch-funded operatives trying to undermine Russia at any cost. (57 minutes)

• As America has become a worldwide empire in service to the alien oligarchs, our government is no longer ours, and has become our enemy instead of our servant. We should return to being empire-busters instead of empire-builders. Stop serving the beast in Washington. (1 hour 10 minutes)

• What is the secret behind the buzzing (and occasional open microphone) that has been continuously transmitted for decades from Russia on 4625 kHz? (1 hour 13 minutes)

• The Windows operating system used in Nokia Lumina mobile phones has been secretly sending detailed user data to the NSA, as the Finnish government recently discovered to its horror. Who knows how many phones have this “feature”? A developer has created a new smartphone operating system called “The Black Phone” designed to defeat most of this spying. (1 hour 34 minutes)

Remember that you can receive the Liberty Net on an open frequency around — usually well above — 3950 kHz every Saturday night at 10PM Eastern Time. Recently 3995 has been the net frequency most often. You can also listen live on the Internet or listen at your leisure via the mp3 files posted right here at https://3950.net every week. And don’t forget the Midweek Liberty Net on Wednesdays and the Survival Net on Sundays — all at ten PM Eastern Time.